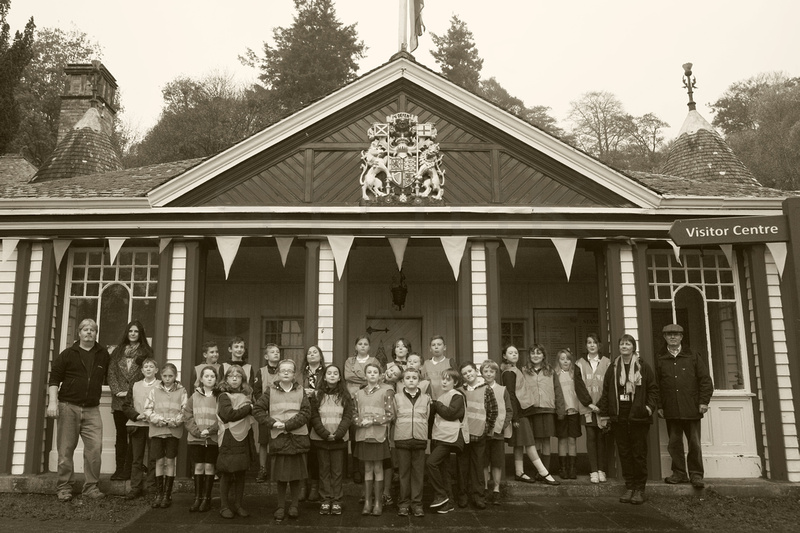 sepia_group_00233rd outing with St Ronan's PS kids around Innerleithen to The Wells and back exploring the works of local 20th century photographer Tomas H. M. Colledge.

Recently I have had the pleasure of being involved in a joint project between our local primary school and National Trust for Scotland business, Robert Smails Victorian Printing Works here in Innerleithen.

The project has been established by Rachel Mays who works at Smails and is doing this as part of her on-going degree studies.

A special class of twenty-two children was selected from throughout P6 to participate in the project which had a two-fold objective.

Having never worked with a class of schoolchildren before let alone 9-10 year olds, I had to think about how to present my subject to them and hopefully gain their attention and trust for a four-session lesson of a couple of hours each.

The remit of the project was to deliver sufficient material (photographs) to be archived on a new web site which Rachel was developing, exploring some of the shots Mr Colledge had taken in the early 1900’s and attempt to locate the viewpoints where he would have taken them and retake a similar shot today. The difference could then be compared on the web site. A selection of the new images are to be printed by the print works as postcards similar in style to the early original collections.

Maintaining the attention of such young children was a challenge in itself and so we decided the best approach was to have an introductory lesson in class, followed by several excursions outdoors. We achieved this by breaking the class into two groups, taking each in turn to go outside and follow up on the original photographs. The other half of the class stayed indoors and was fed information by Rachel, whilst I was accompanied by the assistant head Jan Lister, local historian, Ted McKie and class assistants where available.

My first lesson took the form of a discussion about what photography was, how it originated and the processes and techniques used to capture images. The children were encouraged to ask questions and participate as much as possible. I also took in a couple of early cameras, an old Kodak Box Brownie (my first camera), a 35mm film SLR (loading film to show how it worked), and my digital SLR to explain the differences and similarities.

I was a bit anxious about having to talk for ‘about an hour’ but was amazed we managed an hour and a half with no-one falling asleep! The lesson was wound up with a few favourite examples of photographs I enjoy and the last one took their imaginations to a whole new level. This was of the earth from the moon (called Earthrise) taken by Apollo 8 astronaut William Anders on his first solo mission around the moon in 1968, a year before the Apollo 11 astronauts who replicated it on their historic mission as set by President Kennedy to America in the early 1960’s, "before this decade is out, of landing a man on the Moon and returning him safely to the Earth.”. The rest of the lessons were physical outings (in smaller groups) and the kids were give the opportunity to check locations and take photographs, or at least press the shutter button!! The feedback seems to have been very positive and I look forward to seeing the end results when everything has been complied and published.

I will keep you posted.