Thank you for your patience while we retrieve your images.

10 photos
The title of Kathy Stewart’s new release, Almost Home, suggests the space in which she believes the consciousness of most artists occupy: “suspended somewhere between heaven and earth”, and particularly for her, the unnamed territory that exists between being a native New Yorker and the home she has made in Scotland for over thirty years.

Kathy’s song writing and musical style has developed from this perspective, keeping her native roots intact with the back-up of her talented Peebles-based Americana band, The Frequent Flyers: Alister Rae, Ken Kennedy, Henry Taylor and Murray Charters, and incorporating the Celtic sound that drew her to Scotland in the first place – collaborating with such highly acclaimed artists as Iain Fraser, Hamish Moore, Patsy Seddon, Gerda Stevenson, Kyrre Evjenth Slind, Gordon Deans, Rod Ward, to name a few. This cast of fine musicians – some of which are colleagues of her’s at the Merlin Academy of Traditional Music in Melrose, and others who have inspired, encouraged, and worked with her musically through the years – have contributed to the transatlantic nature of this CD.

Three years in the making, Kathy has co-produced ten tracks of original songs (one of which is a cover by the Canadian singer/songwriter Bruce Murdoch, and another co-written by Borders singer/songwriter Bob Lawson) along-side the innovative, creative energies and skilled direction of Dave Gray at The Sound Café, Penicuik, who “encouraged me to experiment, take risks, and to use the recording experience as a painter would put paintbrush to canvas.”

Inspired by the beauty of the Scottish Borders, its music, and the people she has met along the way – their lives and stories, and her own experience as a seasoned inhabitant of this planet (knowing “there is still so much to learn and we may never fully understand” ) these songs explore the transformative power of love and how it transcends everything, even sorrow and loss, as we continue down that long, ever-winding road home.

Described by the late George Hamilton IV as “one of the finest ambassadors of American music in the UK,” Kathy has recorded with the likes of Dick Gaughan, Andy M. Stewart, Silly Wizard and Davy Steele, and has written and co-written songs covered by such artists as Nashville’s Vince Gill.

With a career span of over 20 years, performing throughout the UK and abroad, Kathy has supported such artists as Steve Forbert, Tom Russel, Kevin Montgomery and George Hamilton IV, worked with Ian Rankin ( Another Country ) John Hinshelwood ( The City Sinners ), Hendry White ( The Red Clay Dirt Band ), Patsy Seddon and Gerda Stevenson ( Madge Wildfire ), along with headlining concerts backed by such UK artists as Alan Bertram, Colin Macfarlane, and presently, The Frequent Flyers.

Nominated as HMV’s best country newcomer after her first recording on Fellside in 2000, Celestial Shoes, she went on to record what Maverick described as “pure gold” in 2009: Hope, Tears and Tambourines. Kathy is presently about to launch her third, long awaited CD Almost Home at The String Jam Club, the County Hotel, Selkirk , 11th June, 2016 with the Frequent Flyers and special guests Iain Fraser, Hamish Moore, Patsy Seddon, Gerda Stevenson and Rod Ward. 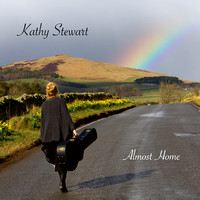