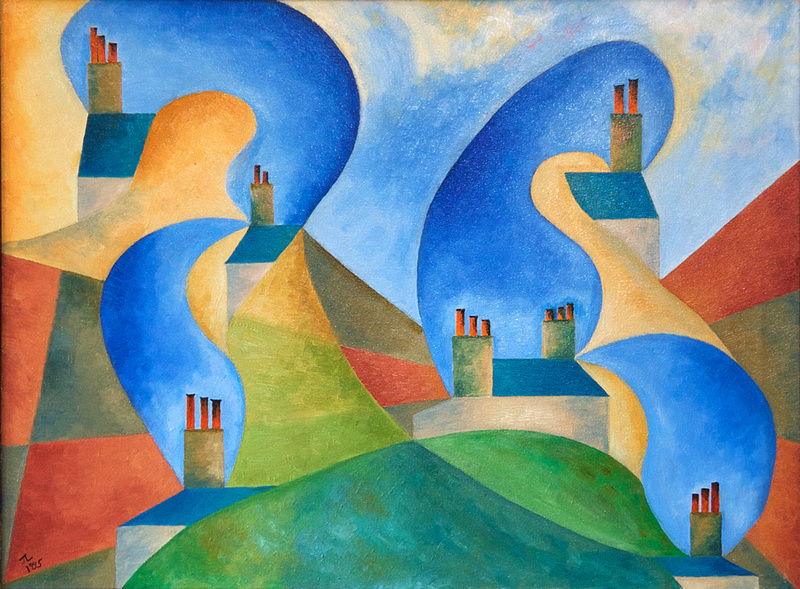 I first met Dr John Laidlaw in the late spring of 2007.

He was looking for a photographer to archive his collection of paintings which he had at his home in Peebles. We agreed a fee and I headed over to see him a few days later. I remember my back was giving me grief again and so my mobility wasn’t at its best, however I managed pack my gear and tripod and drive over.

On arriving, I was greeted at the door by an elderly gentleman dressed neatly in a teal coloured shirt and slightly loose-fitting light brown corduroys held up by a pair of blue braces, who welcomed me in and introduced me to his wife Mary. We then had a look at his collection displayed on several of the walls in different downstairs rooms and hallway, before escorting me through to the kitchen and into his back garden where lay his artist studio. 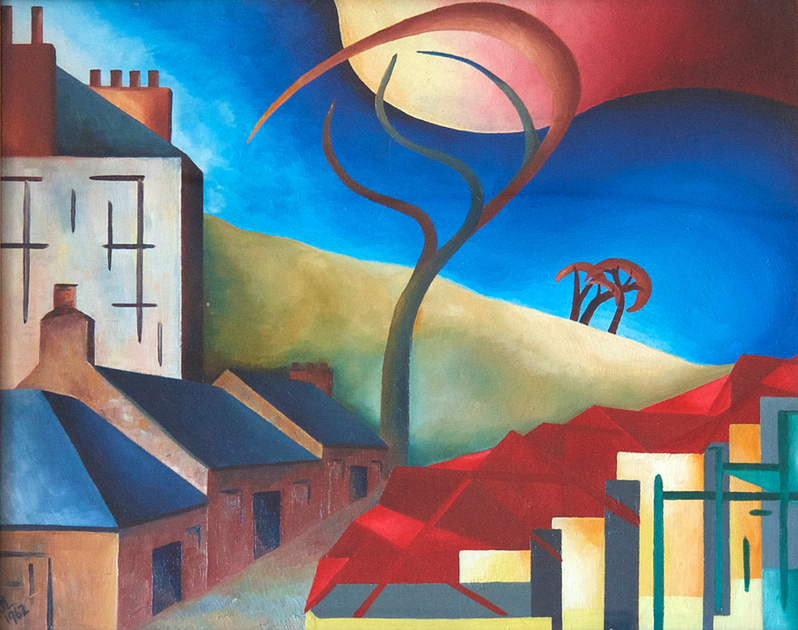 The purpose-built extension to the main house projected into the garden and we entered from a side door on the longest wall where there were several large windows. The windows Dr Laidlaw explained faced north, an important direction as any painter or artist worth their salt will tell you. This is because the light is more constant and non-directional, since the sun doesn’t cross its horizon, providing a constant ‘light’ throughout the day.

I decided there and then that this was where I would photograph his collection and we began setting up an area on the eastern back wall adjoining the house where we could hang each picture to be photographed under the constant natural light.

Paintings, particularly framed paintings, can pose a bit of a challenge if glass is used as it acts like a mirror, reflecting light and anything before it. I was fortunate though that the majority of his works were framed without glass and so my job was made that bit easier. I still prefer to photograph artworks this way - under natural light.

I was amazed at what I found there in his collection which he had amassed over the past seventy years. As I am someone who was more artistic than academic at school, I could readily appreciate the complex shapes and colours he used in what were overall, pure abstract works. 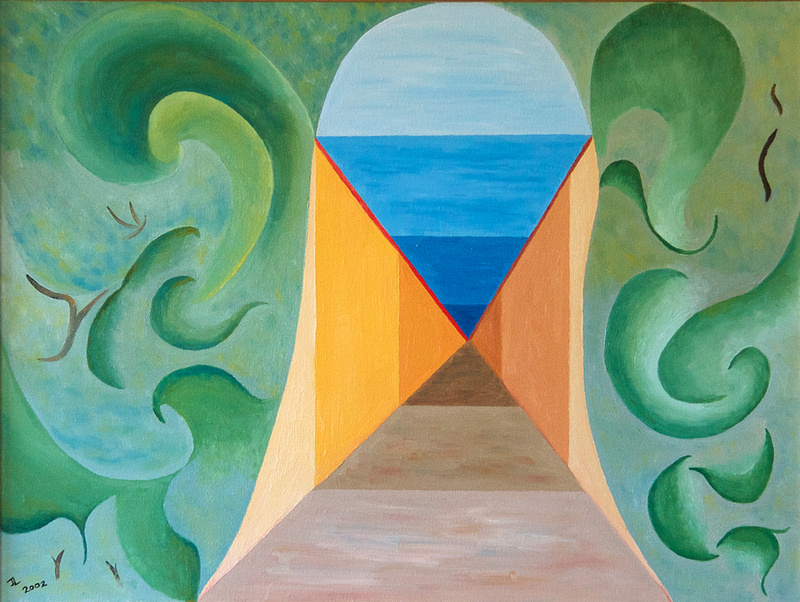 Dr Laidlaw as I said earlier was an elderly gentleman,. At eighty seven, balding on top with strong grey moustache, he had a slightly mischievous twinkle yet critical look in his eyes. You got the impression he was evaluating you.

Though frail, he was still able to move about quite well, perhaps better than I with my crocked back as we manoeuvred pictures from one location or other in the house to the studio for photographing. It was through this process, I was able to strike up a conversation and get to know him a little better. 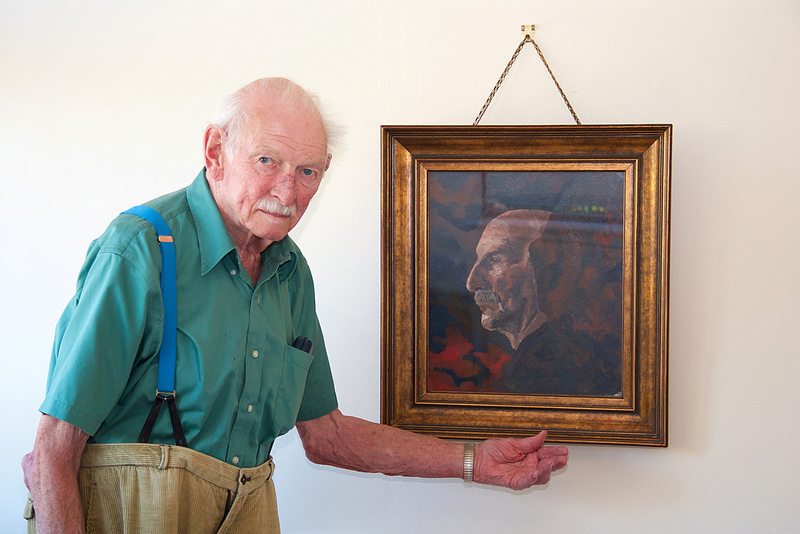 2007-05-03 IMG_3191Dr John Laidlaw FRCP with the early painting he did in his youth which ended his art career when his teacher took a knife to it. John gave up art and pursued medicine instead. Uncannily, the subject looks rather like him as he was when I met him.

Following a long and distinguished career as a neurologist specialising in the field of epilepsy, Dr Laidlaw, a Fellow of the Royal College of Physicians in Edinburgh since 1947, had retired to Peebles with his wife Mary in 1999 where, encouraged by her, he took up his passion again for abstract painting. He was largely self taught and in his early years associated with other artists including William Johnstone from Denholm.

Dr Laidlaw’s career got off to a jumpy start when as a student, he decided his future lay in becoming a painter and indeed left the renowned Winchester College (where he had done 'very well') to do just that, however after one of his teachers took a palette knife to his portrait composition, which looks uncannily like him in old age, he decided that was a step too far and promptly left, turning his attention to study medicine instead. This life changing event was a loss to the art world but a definite gain to the neurological field of epilepsy. 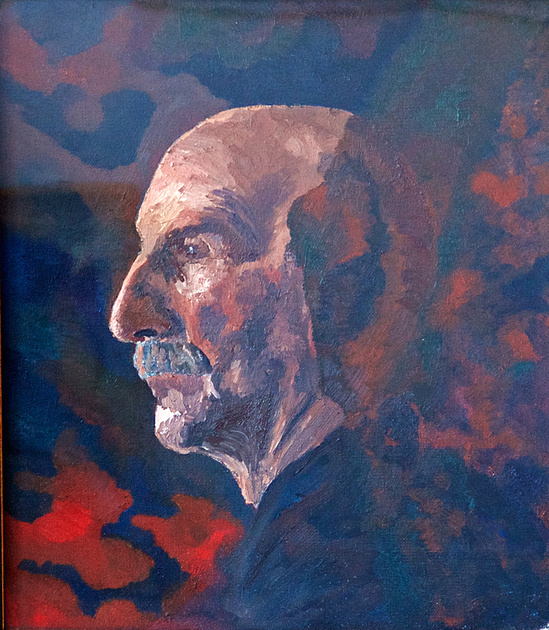 2007-05-03 IMG_3188Dr John Laidlaw FRCP. The early painting he did in his youth which ended his art career when his teacher took a palette knife to it. John gave up art and pursued medicine instead. Uncannily, the subject looks rather like him as he was when I met him.

It is interesting that he chose to specialise in epilepsy and one wonders what kind of brain he possessed to create such imaginative and beautifully colourful abstracts. For me there is also a suggestion of surrealist influences. 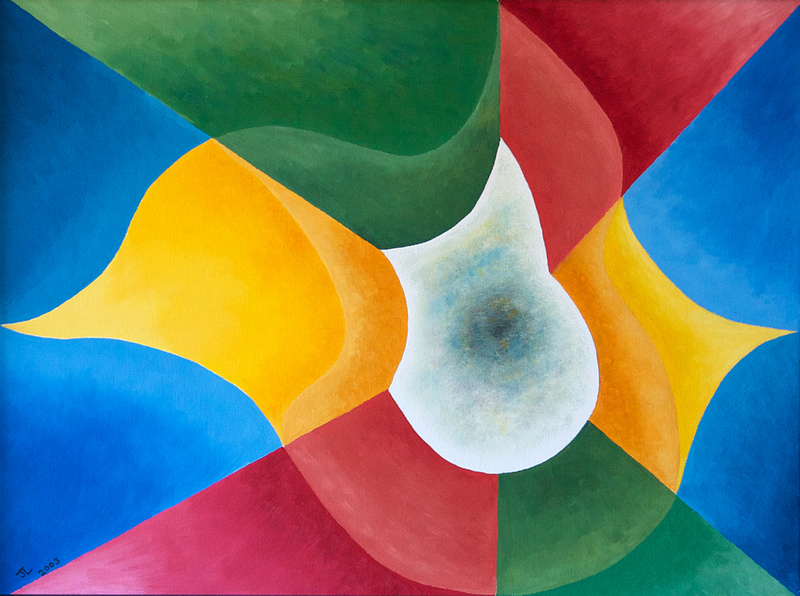 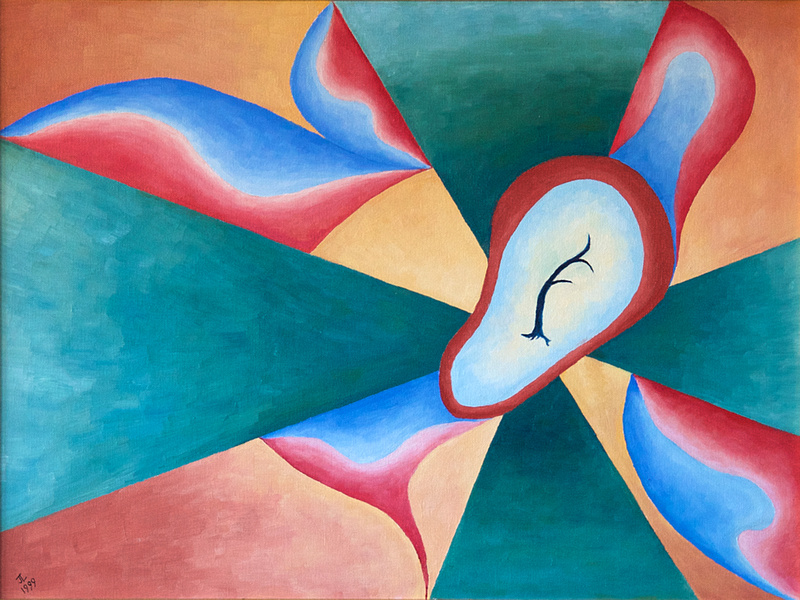 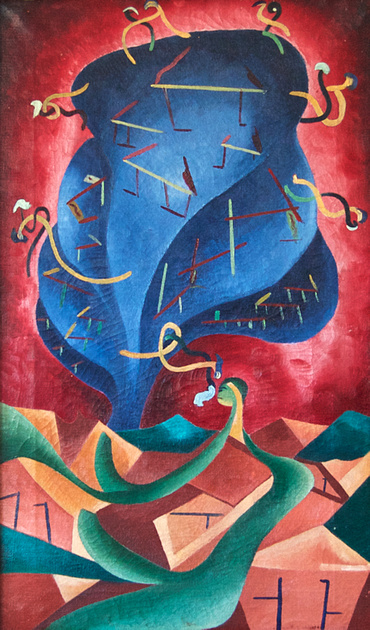 At that time I was working freelance for two lifestyle regional magazines and I managed to get him published in Border Life magazine (issue 53 Autumn 2007). The article expressed his lifelong dream to have his works exhibited before he passed and I was delighted to learn that a venue in Peebles had fulfilled his wish later that year after reading the article.

Dr Laidlaw passed away peacefully in the summer of 2009.

Note: I have a gallery of his works on display at this link in Client Galleries > Artists > Painters 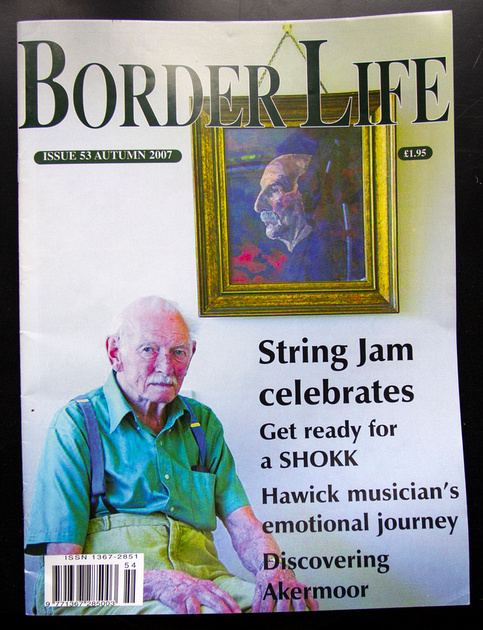 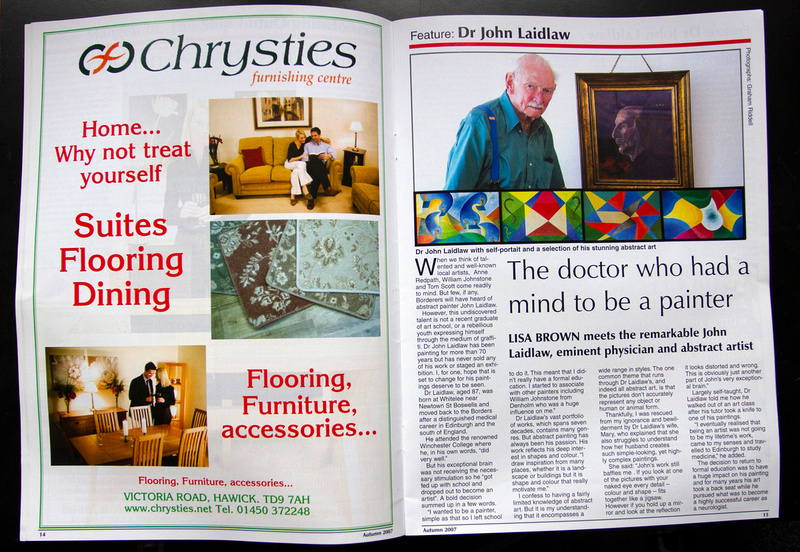 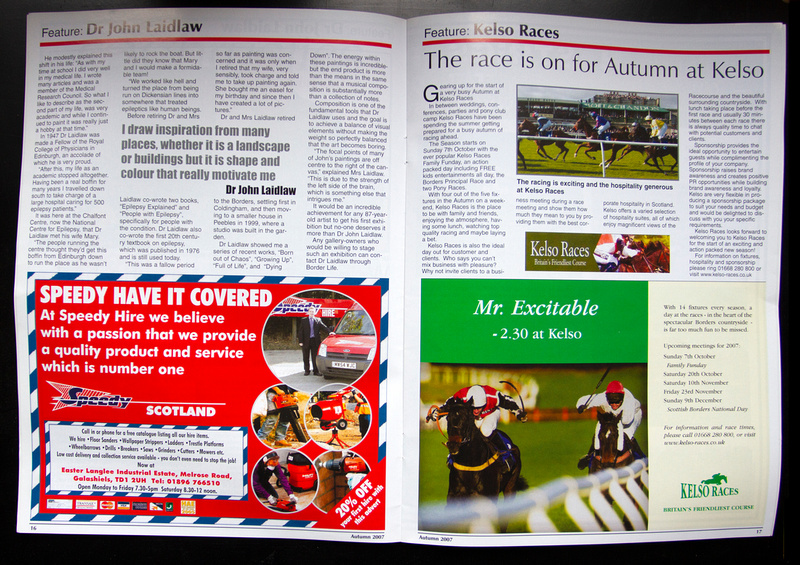 Graham Riddell Photography - Freelance & Fine Art Photographer
Hi Cary, no I didn't get into that in the time I had with him, though your observation in a relationship between the two is interesting. I don't believe he had any issues of that kind himself but it does make one wonder why he chose that branch of medicine and if his mind was somehow adaptable to understanding the internal processes.
Cary(non-registered)
Very interesting work.
Did you inquire or did he volunteer info about any relationship between the paintings and his work with epilepsy or the brain in general?
No comments posted.
Loading...
Graham Riddell Photography Blog
Subscribe
RSS
Recent Posts
ITV Borders feature on Border Life Such a Perfect Day - at Traquair House One Woman and her Dogs Sacred Spaces Cold Water Swim or Cold Feet? The Hedge-cutter that wasn't “I wanna tell you a story” Turning a Crisis into a Creative Opportunity Rainbow Valley - Scottish Borders Dr John Laidlaw FRCP, Abstract Painter & Artist
Keywords
Scottish Borders photography blog Scotland landscape art how to nature basic photography uk
Archive
January February March April May June July August September October November December
© Graham Riddell Photography - Freelance & Fine Art Photographer
User Agreement
Cancel
Continue