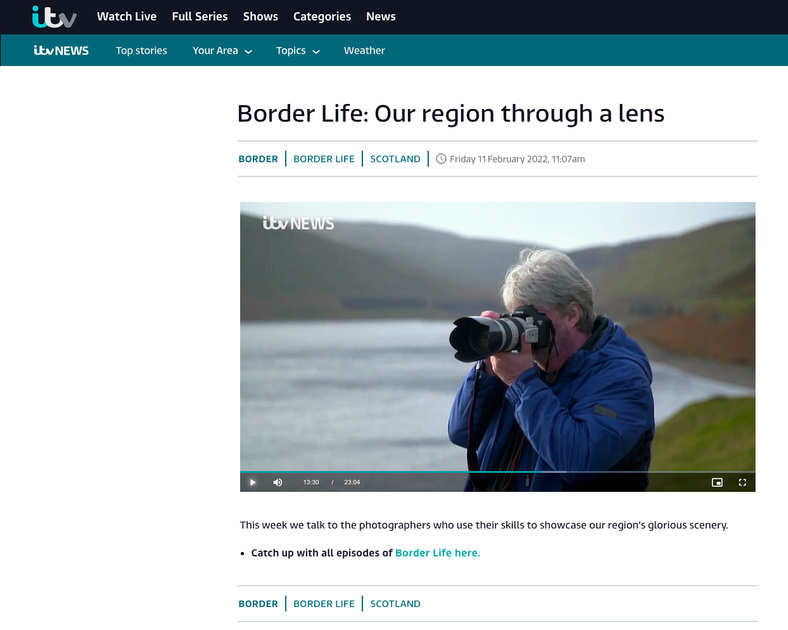 Feature starts at 13mins 28 seconds in

It isn't every day you receive an email from a media news company asking if you would be interested in being featured in an up and coming TV show.

So it was back in October 2021 when journalist and online producer Sandy McCracken, got in touch about a feature he was producing on photographers within the region. I am perhaps better known for my Landscape & Nature imagery and he was keen to film me out on location at one of my favourite spots.

I chose Megget Reservoir in the Ettrick Valley here in the Scottish Borders as it lies between Talla Water & reservoir and St Mary's Loch which is a happy hunting ground for me, though my shooting is by camera and lens, not rifle.

We duly met up at Cappercluech on the banks of St Mary's Loch and drove up to the reservoir to film. I have to say, I am a complete novice when it comes to being on the other side of the lens and so, with Sandy's careful instructions, I followed his lead to answer his questions as best I could. It is an interesting process this film-making business! Since we were still under Covid restrictions we had to keep a safe distance between us and travel separately. So that was three car journeys (Sandy, his cameraman and me), when one would otherwise have sufficed in normal times.

Megget Reservoir was built in 1983 and is the largest earth damn construction in Scotland and a magnificent feat of engineering. It captures its precious cargo from the Tweedsmuir Hills and has a controlled release back to St Mary's Loch via the Megget Water. The damn feeds, by way of underground pipes through the hills, other receiving dams along the route which store the water supply for Edinburgh.

Photography is about Light. How it interacts with matter whether the landscape, human or other form.

In landscape photography, the 'quality' of the light is determined by the time of day, weather patterns and the harsh contrast of direct overhead sun. For these reasons, photographers are often heading to locations at unsociable hours in the very early morning, late afternoon or evening, to catch the low contrast light of dawn and dusk in particular. At those times, creative opportunities can be explored to great dramatic effect.

As I mention in my piece, I am not your usual landscape photographer. With a background in graphic design, my eye is often drawn to how the light creates shapes, forms and colours other than specifically views. It is not to say I don't take these too, it's just my style is perhaps more open to interpretation of what I see around me from an artistic perspective, where the image resonates with me and sometimes is therefore more abstract or at least, less definitive of location.

My art photography, as I call it, feeds my creative impulse and engagement with nature. It is what I love most about the photographic medium. It also is my source of work for Stock Images, Wall Art projects, Greetings cards, Desk calendar and more.

It is harder being a photographer today, but I do not bemoan the advance of technology, as it was through Digital, that I first got into commercial opportunities when I first started out on my own in 2004. Today, many phone cameras are more capable that those early compacts that preceded them and have unleashed enormous creative expression for millions more with apps and filters too.

I still shoot only Stills on digital SLR's and have not followed so many other photographers into drones or video, preferring the single, silent second when an image was taken.

Below are a few images from the programme and my archive. All my images are available to purchase as Stock images for commercial projects, or wall art for the discerning buyer.

I do hope you enjoy them and please do leave a comment or contact me with any requests you may have. 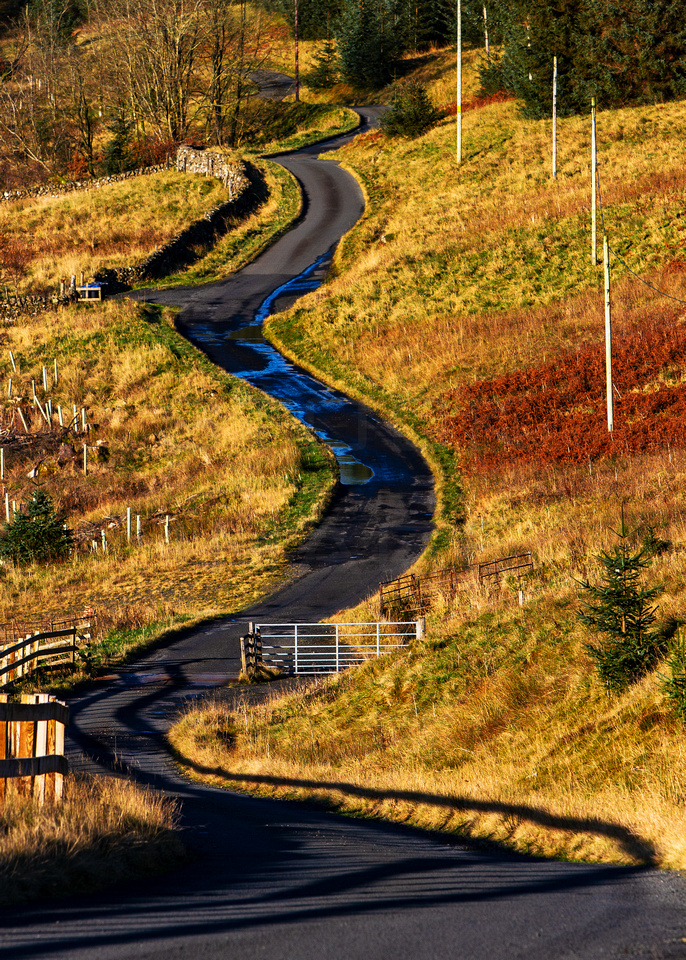 The Long and Winding Road to Fruid_0055_7D2I'd never been before in all the twenty-four years I have lived in the Borders and yet have passed the road end to Fruid reservoir many times.
Almost about to repeat my mistake I hesitated before deciding to follow the narrow single track road up.
As it curved and undulated towards its inevitable destination, I was glad no other traffic, especially lorries, were joining me.
Looking back from the top of the road at the damn head where the Fruid water is again released from its incarceration, I got a better impression of just how tortuous this road actually is as it twists and turns, weaving almost in parallel to the now narrowed river Tweed rising to its source. 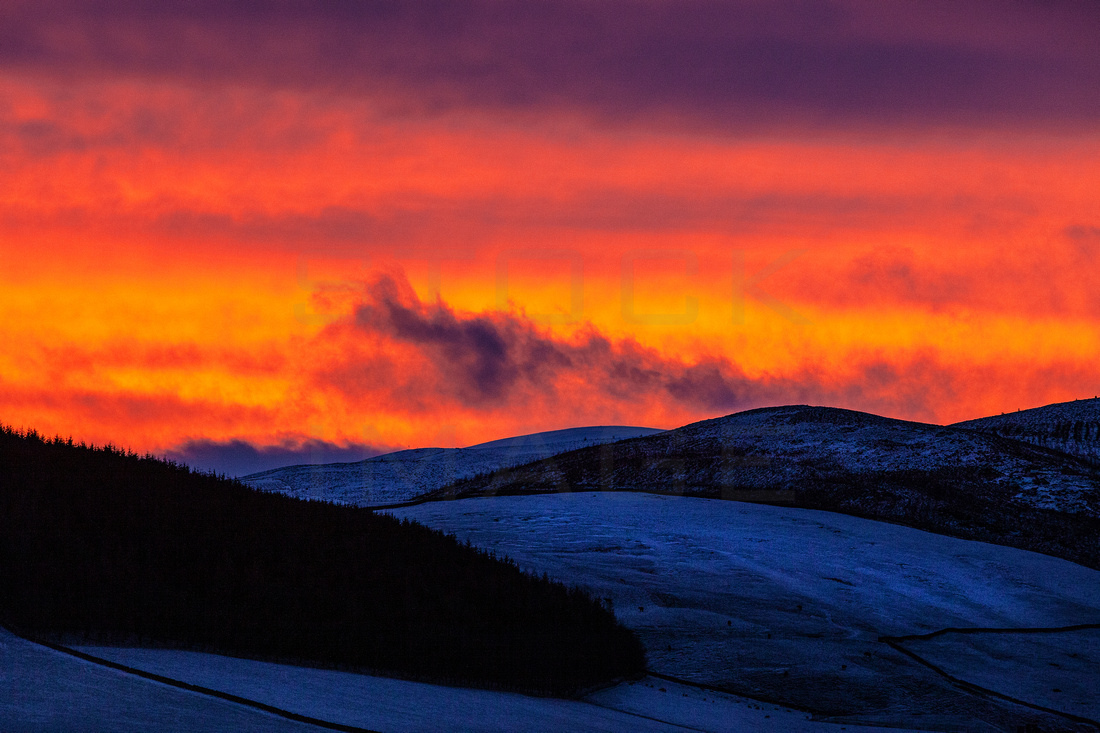 Fire over Ice_2043_localJust after the sun set behind the icy hills of the Southern Uplands, in that magical moment when the sky suddenly and briefly flares up. 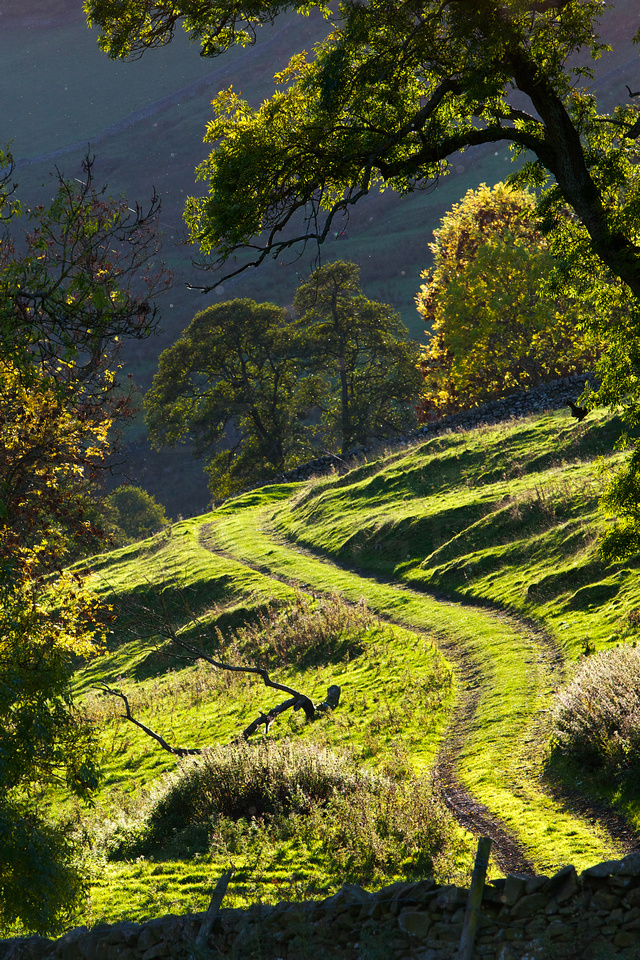 Track through Autumn_0858A farmtrack winds its way over a hillside through trees now turning in autumn colour. 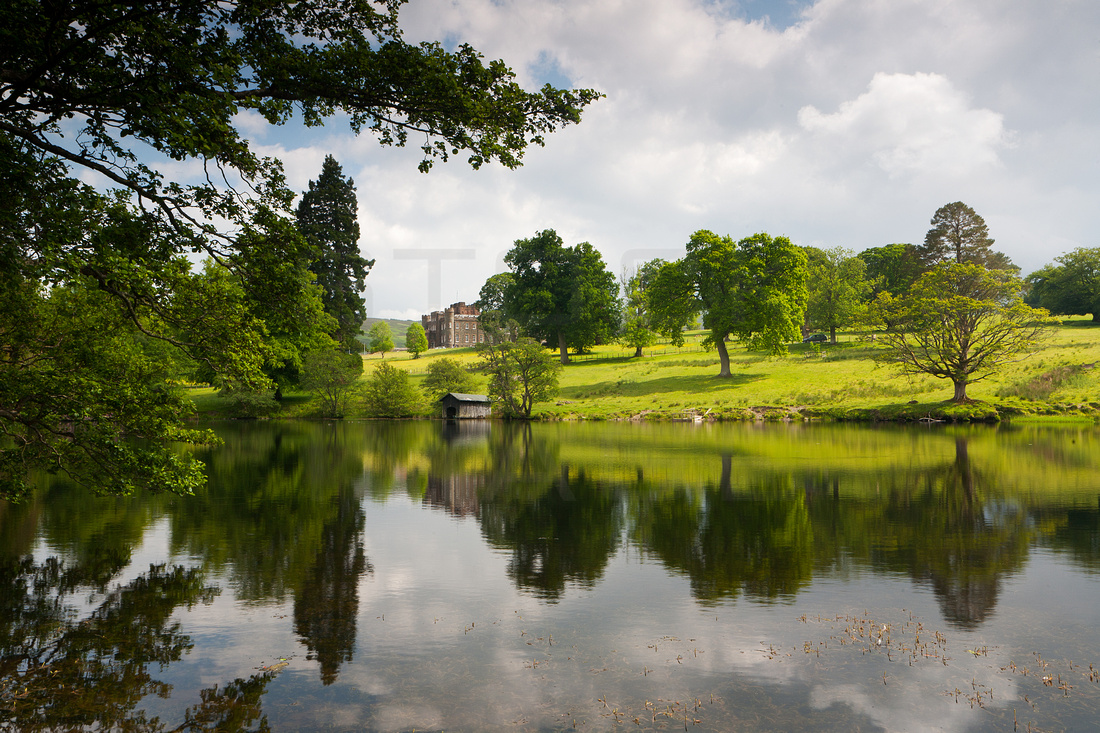 Peace and Tranquillity by Stobo Castle_0792Stobo Castle Health Spa from across the pond. Stobo, Scottish Borders.

Tweed Valley Sunrise_9466The sun rises over Pirn Craig, Innerleithen on a frost and misty morning in May 2011 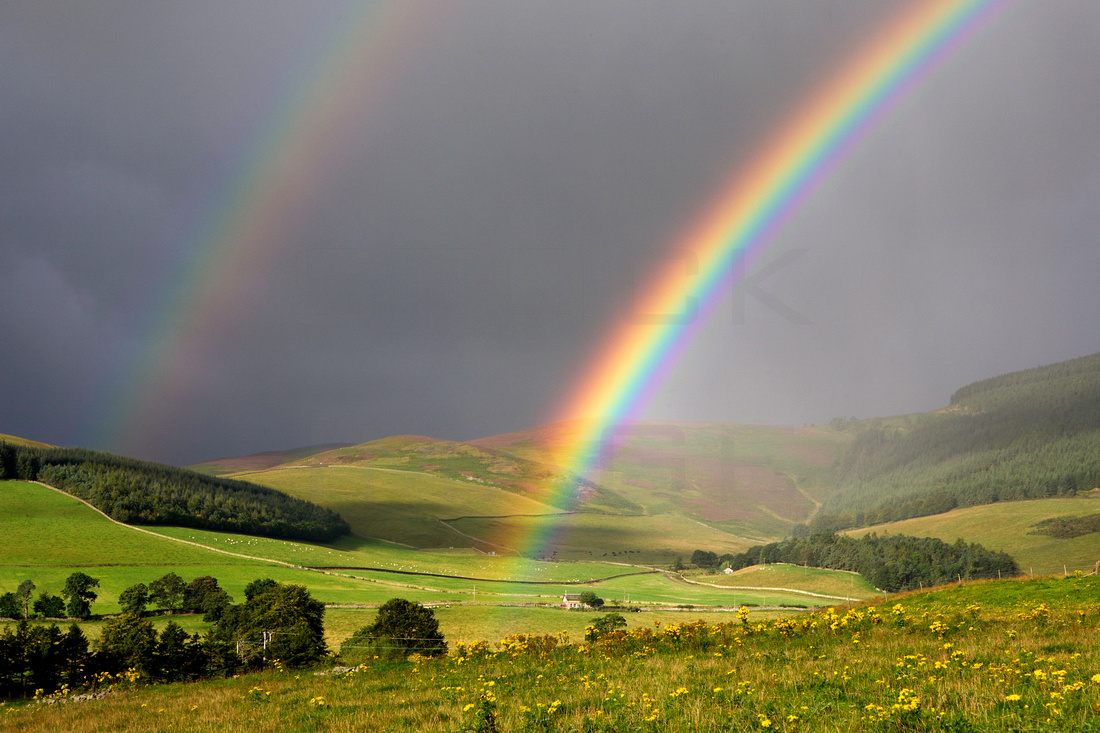 Double Rainbow below Orchard Rig_1574Double rainbow forming on the western outskirts of Innerleithen, Scottish Borders during a sudden squall 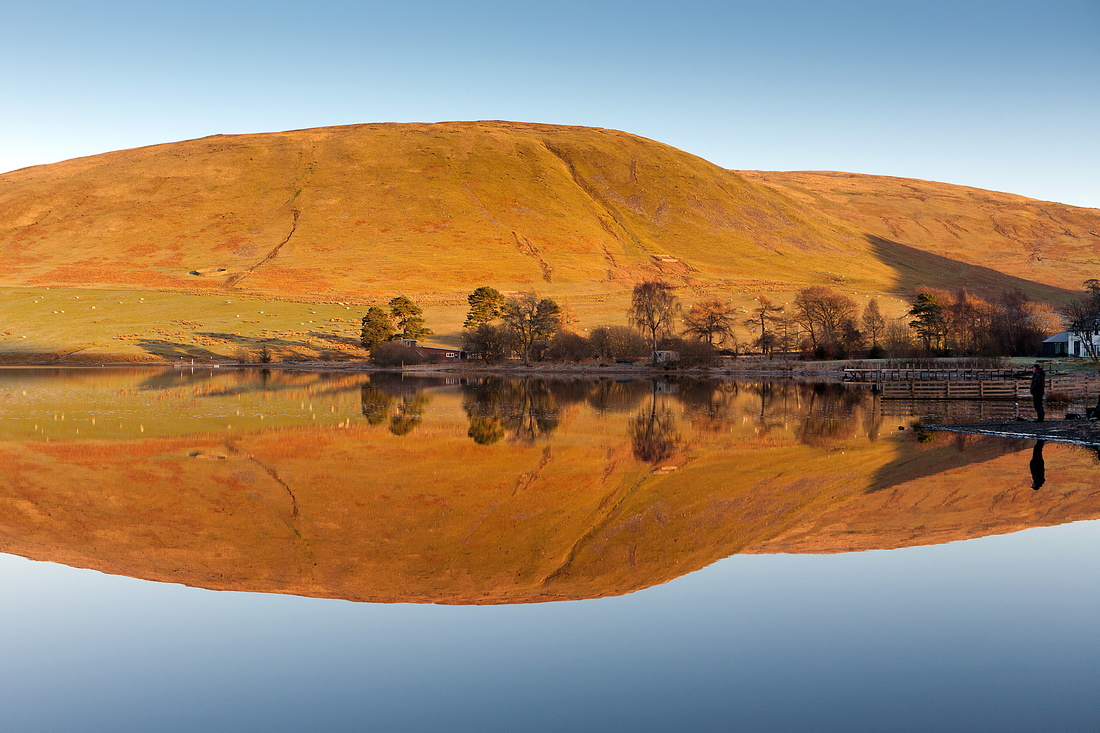 Standing Still by the Loch_0018A wee trip down to the magical St Mary's Loch. She never fails to deliver. Here a fisherman stands in perfect harmony with the stillness of the loch and its perfect reflections.

Hard copy Vs soft copy 2022(non-registered)
Photography is a skill and not everyone can do it. The above pictures are a true representation of how you could convey your message to the world through pictures without even saying a word. I am also a travelling enthusiast and would love to witness these scenes with my own eyes. Thanks for posting such lovely pictures
No comments posted.
Loading...
Graham Riddell Photography Blog
Subscribe
RSS
Recent Posts
ITV Borders feature on Border Life Such a Perfect Day - at Traquair House One Woman and her Dogs Sacred Spaces Cold Water Swim or Cold Feet? The Hedge-cutter that wasn't “I wanna tell you a story” Turning a Crisis into a Creative Opportunity Rainbow Valley - Scottish Borders Dr John Laidlaw FRCP, Abstract Painter & Artist
Keywords
Scottish Borders photography blog Scotland landscape art how to nature basic photography uk
Archive
January February March April May June July August September October November December
© Graham Riddell Photography - Freelance & Fine Art Photographer
User Agreement
Cancel
Continue