One Woman and her Dogs 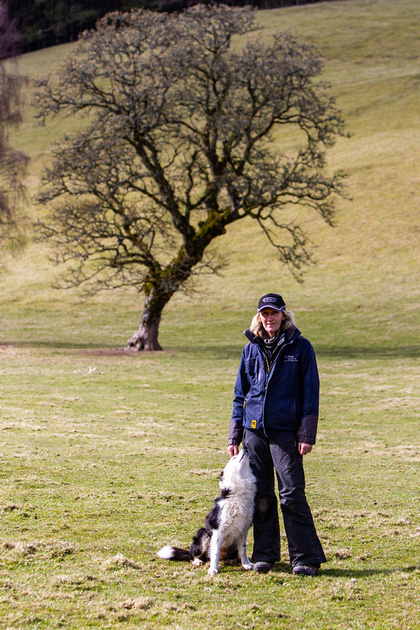 Julie with her dog Ban

What has a woman born in an industrial town have in common with estate owners, farmers and sheep?

At first sight it might seem unlikely but there is so much more to Julie Hill’s DNA than her soft northern accent and town upbringing. Whilst Julie’s mother had settled in the town of Scunthorpe and sought to raise the young Julie there, her grandparents and great grandparents were in fact farmers and it was only through a twist of fate, that Julie’s ancestral pedigree was derailed after the untimely death of her great grandfather in an industrial accident at an engineering works in Scunthorpe, where he had gone to support the war effort, leaving the farm he was raised on to his other two brothers and so the link to the land was broken.

But the country blood runs thick through her veins and so when just a teenager, Julie had the opportunity to move to Cambridge to work with horses on a farm. They also reared sheep and her remarkable journey with dogs began after an accidental birth of the farm bitch. Julie kept one of the pups and her interest to train was awoken after realising the potential it had as a working dog. Joining the East Anglia sheepdog club she took on the task of trying to train the young collie. Meg was a natural worker and very keen, but also difficult to control.

It was through these early experiences that eventually led Julie to develop her own unique method of training and communicating with sheepdogs, which she terms 'The Natural Way’, and was the catalyst to a string of firsts and successes in Sheepdog Trials both nationally and internationally. In 2014 Julie wrote and published her acclaimed book by the same title, which today is a highly respected training reference book amongst her peers and dog owners world-wide wishing to follow her teaching methods. 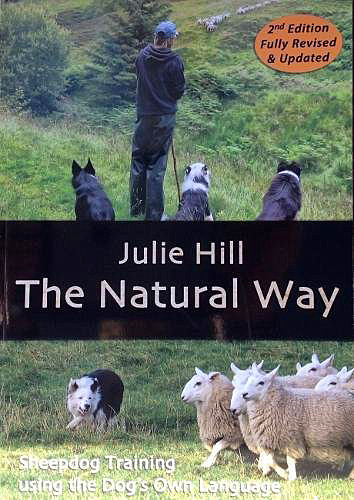 Julie came to Scotland in 1988 with several sheepdog trials successes already to her credit and worked on many sheep farms in the north of Scotland before working for Sciberscross Sheep Club which was run by ten crofters in Rogart. There she single-handedly managed over a thousand sheep across 8,000 acres of tough highland hillside. For the past sixteen years, Julie has been the tenant farmer and shepherd on the Carcant Estate at Heriot in the Scottish Borders, where she manages over five hundred sheep and runs her dog training business, Neth Hill Border Collies. She became Scottish National Champion in 2014. 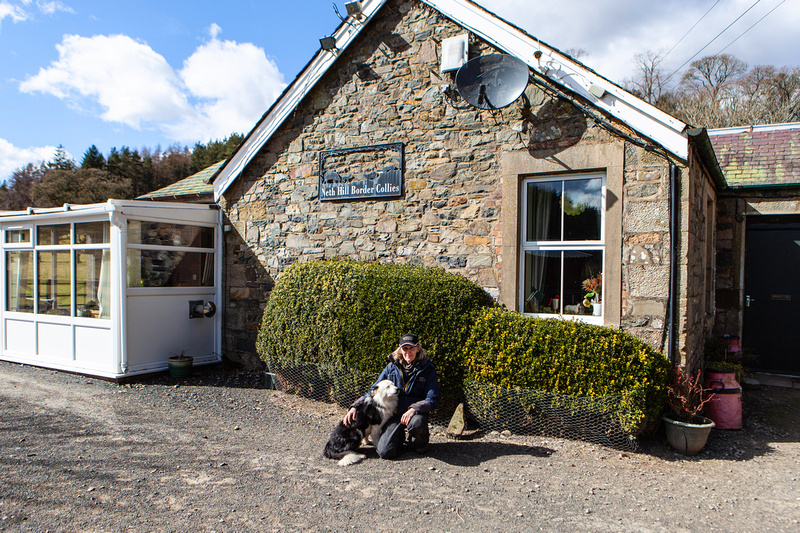 Julie’s training method involves understanding the pack mentality of dogs and in particular her beloved Border Collies and how they communicate to exert control, maintaining a bond in unison with them by deploying her Pressure/Release technique - the language of the dog - to transfer her presence and energy to them and they in turn to the flock. 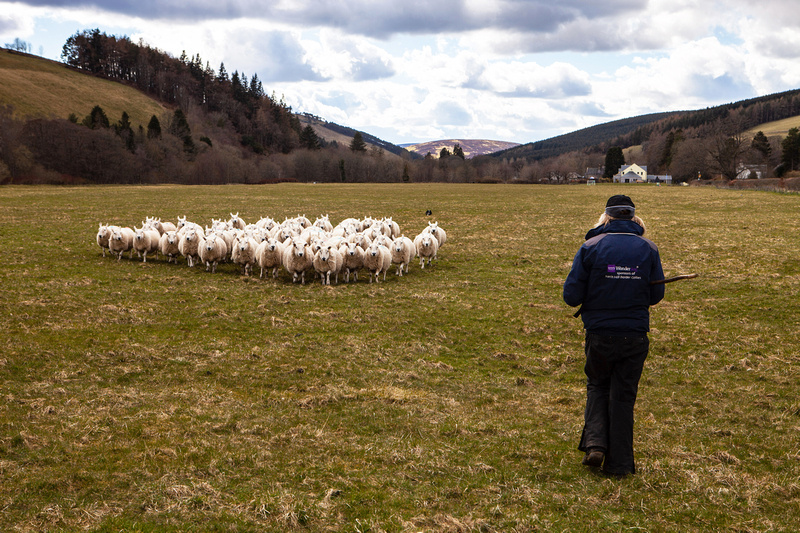 Bringing the flock down from the far end of the field 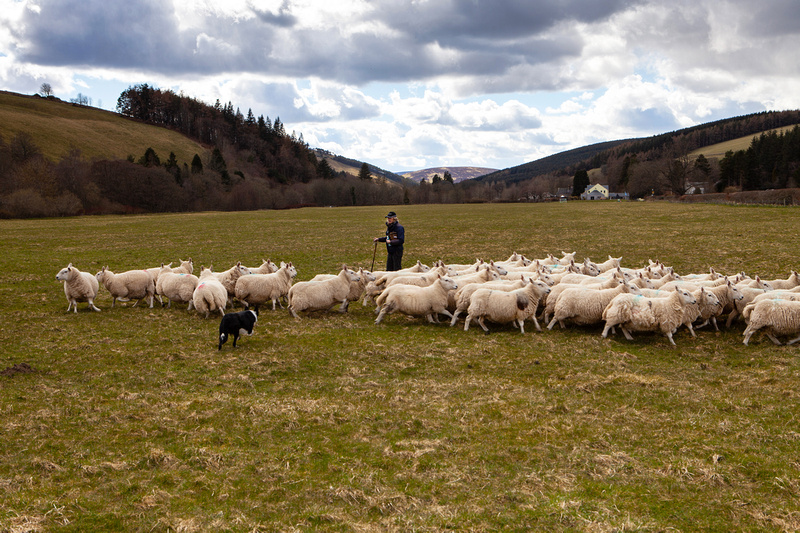 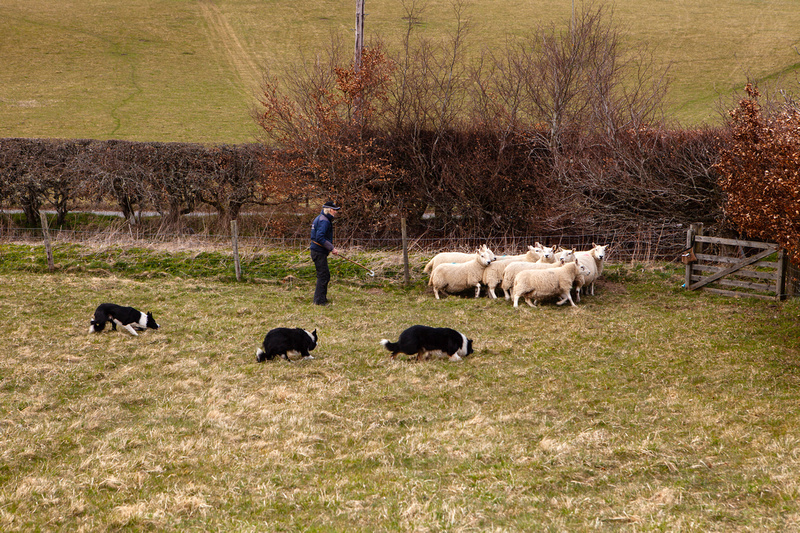 Isolating one sheep to receive an injection whilst working three dogs 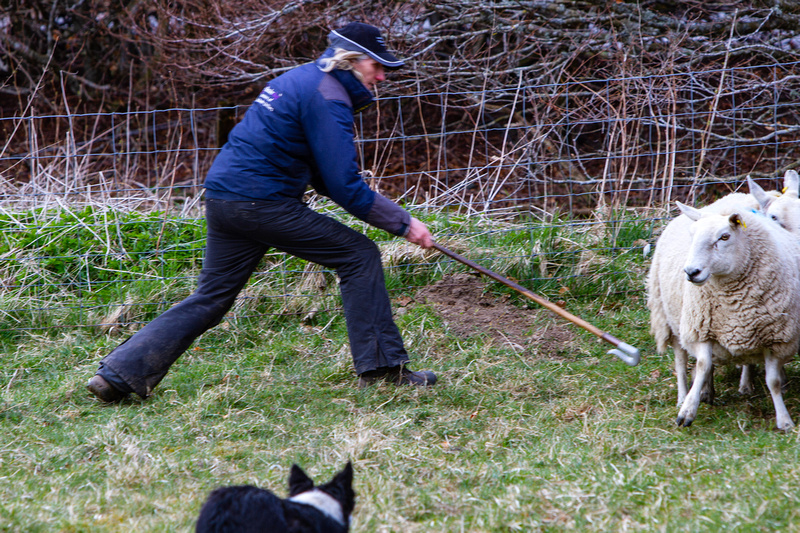 Going for the hookJulie acts swiftly to hook her sheep for treatment.

Julie acts swiftly to hook her sheep for treatment. 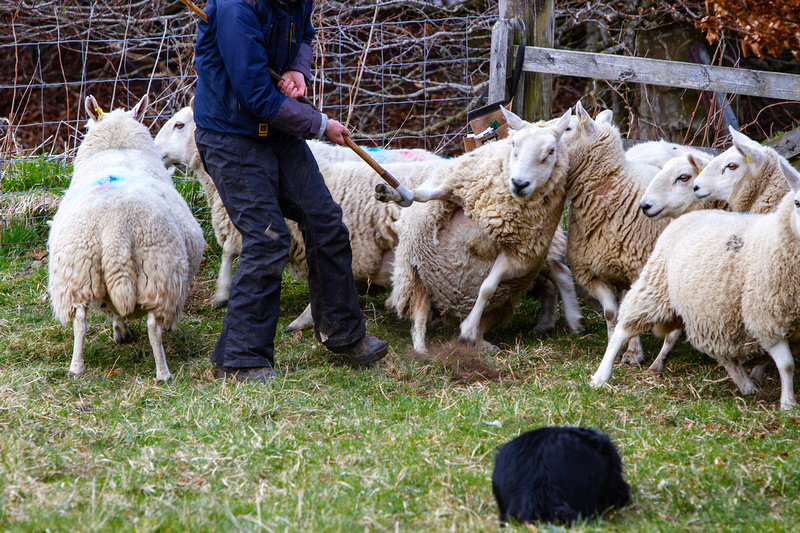 Now to turn it overBy hook or by crook, Julie captures the sheep needing treatment.

By hook or by crook, Julie captures the sheep needing treatment. 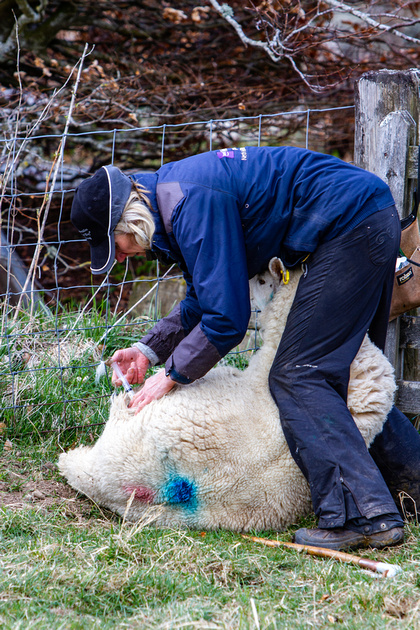 Whilst Julie’s achievements are remarkable, her quiet but assured demeanour projects and instills confidence in those that work with her whether they be estate owners, farmers or dog handlers. She would also be the first to acknowledge her dogs, largely bred and raised by her, in teaching her their ways and thus allowing her to communicate with them as one of them - their pack leader. 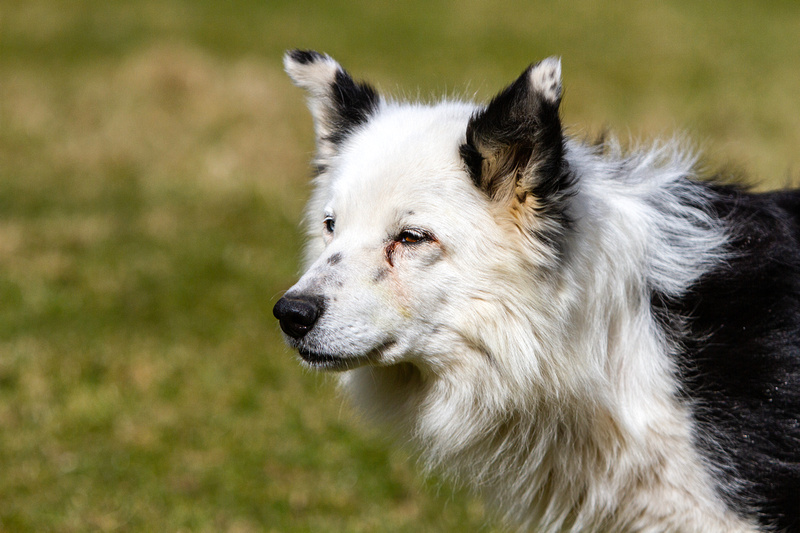 Below is a list of the many achievements Julie has amassed with her Border Collies over her sparkling four-decades long career. She has acquired almost Guru status internationally in what is largely a male driven profession, and is still the first and only woman in over 115 years, to be crowned ISDS Supreme International Champion since its inception in 1906 and joins a very rare breed (male or female), to have won both the Supreme, and Brace, International Championships. 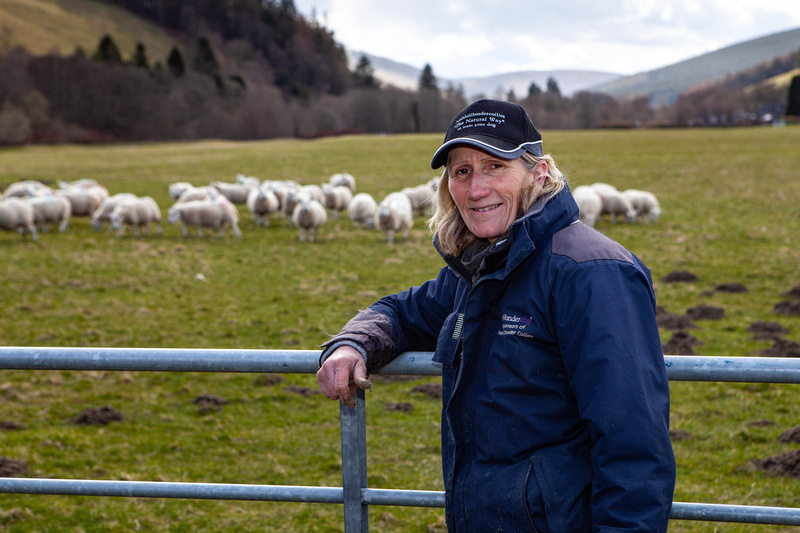 Julie HillJulie with some of her flock at Heriot

Julie with some of her flock at Heriot

But it would be most remiss of me to fail to mention some of those who's natural instincts and abilities she has worked so closely with over the her forty year career - her dogs. Ban (pictured with Julie) - Sid, Jiggs, Kep (three generations together in the back of the truck) and Moss (pictured below) who she won the Supreme International Championship with in 1996 and was her inspiration and teacher of a ‘new way’, have all, in their own way, been essential to Julie's success and share in it with her. 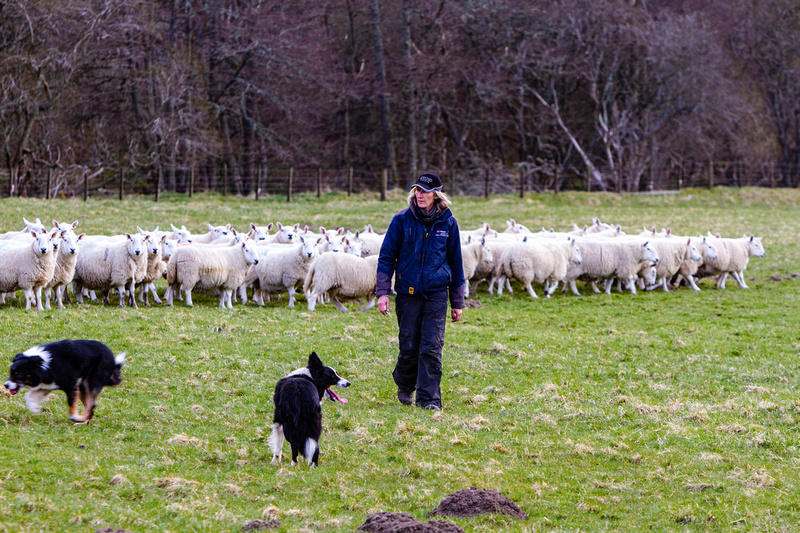 Julie with flock and dogsJulie with Jiggs and Kep

Julie with Jiggs and Kep 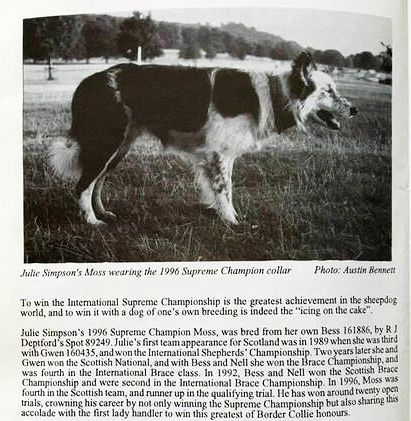 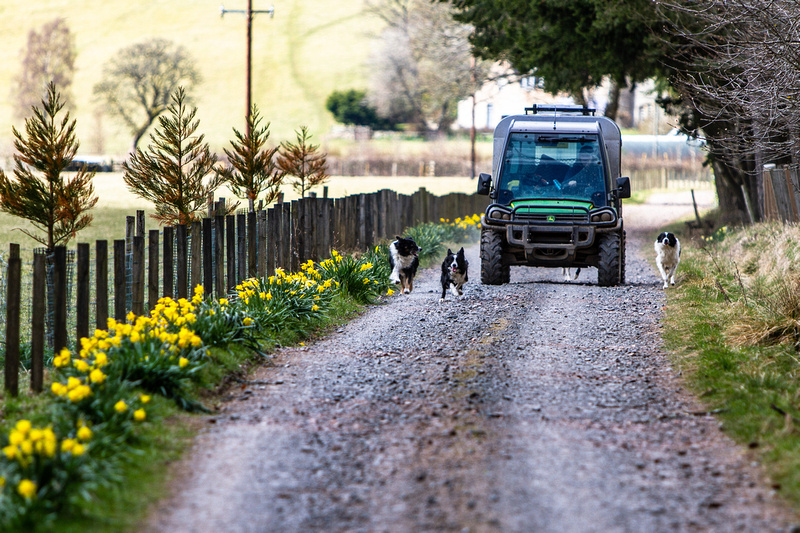 On the way to work down the farm track 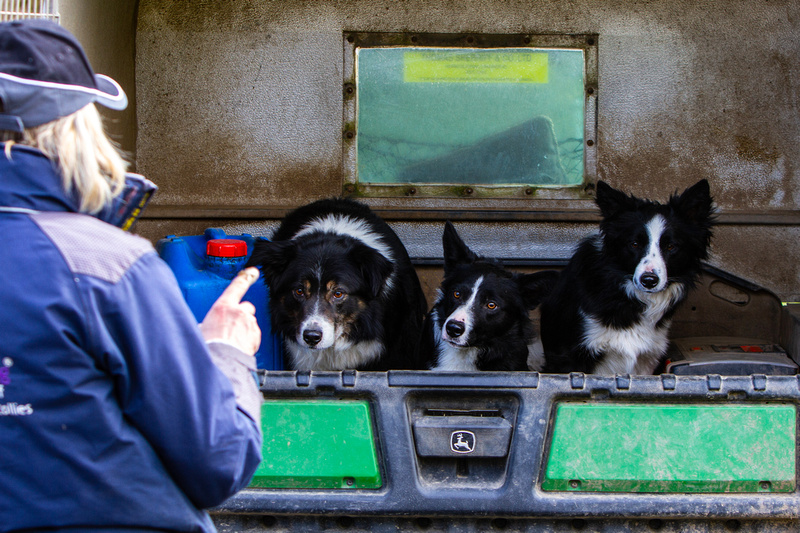 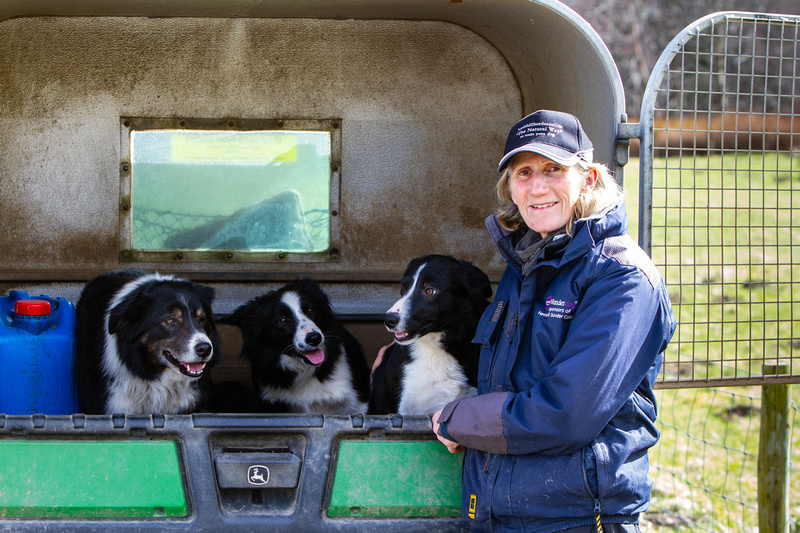 Julie and her dogs(L-R) Sid, Jiggs and Kep with their boss

(L-R) Sid, Jiggs and Kep with their boss

My visit to Julie’s farm and business at Neth Hill Border Collies was a privilege and I gleaned a great insight into the working minds of shepherd and dogs and maybe a few sheep too.

My thanks for her time to allow me to explore and record part of her intriguing story and to include her in my ‘People of the Valley' project.