So What IS Photography?

At its root, photography employes technology to capture and record light-based images in real time. It literally means “Drawing with Light’, from the Greek phōs (light) graphé (lines or drawing).

The word camera comes from the Latin for a 'Vaulted Room' or dark chamber, in reference to the early Camera Obscura, which could project light from outside onto a wall or table in real time and is something that continues to amaze me even now. Many artists also used this device for drawing perspectives accurately.

In the late 19th and early 20th century - the pioneering days, photography was regarded more as a science and equipment was much more cumbersome and technically more demanding to use. The photographer's technical skill quickly became a fashionable 'must have' portrait capability for families across the world, however, the medium also attracted others who saw its creative potential and right from the beginning artists displayed their innovative techniques to excited new audiences through stills exhibitions and movies.

These early cameras took single-shot exposures or 'stills' and in their most primitive form they were constructed of a rectangular box with a hole on the front or 'aperture' fitted with a simple lens and a roll of light sensitive film inside at the back. These simple devices, referred to as Box or Kodak cameras (after its inventor George Eastman) worked best in good daylight and were inexpensive to produced in volume, bringing photography to the masses for the first time. They are the forerunners to the modern hand-held cameras we have today which, though much more sophisticated, operate around the same basic principles.

If more detail was required, or if light conditions were variable, then the hole's size could be altered using a sliding metal device with different sized holes which covered the aperture and 'stopped' or reduced the amount of light entering in predetermined, measured increments. See my little Box Brownie below (its seen better days)!

Another design of early camera was a large wooden box with an optical lens instead of a fixed hole. The 'exposure' (of light onto the film, or light sensitive coated glass plate inside) was controlled by using a lens cap to block or allow the light entering inside and a watch to accurately measure the required 'time' to take the exposure.

So here then are where the first three principles of photography were born, namely, Light Sensitivity (of the recording medium), Aperture and Time and they have stood for over 150 years until the present day. Today, we still consider these three elements when learning photography and use the terms ISO, A or AV (aperture value), and S or TV (speed or time value). We call this the 'Exposure Triangle' and I have included an example diagram illustrating this below.

The exposure triangle contains the key elements to making a 'correct' exposure and is the basis of teaching I use on my Photo-Walks and lessons.

ISO (or in the days of film, ASA), is an international standard which in photography is used to describe the 'Light Sensitivity' or reactiveness of the recording medium. It is generally my first consideration as it was in the case of film, since we have to consider the available light before determining the rest.

As light fades, a higher rated film was used which reacted faster and so could still capture usable images in poor light. A slow film was generally in the range 25-50 and possessed critically fine particles and was used for recording high detail work. A basic standard negative film was in the range 100-200, then as the number increased up to 400, 800 and so on these 'fast' films were progressively grainier. Slide, or Positive film, was usually in the lower end of the scale such as Kodak's 64 which possessed magnificent colour balance and saturation.

Digital cameras work in a similar way and here ISO refers to the sensor rather than film and its capability of storing light wave energy. Today, instead of having to change the film every time the lighting conditions change, digital camera users are able change the ISO setting on each and every shot according to the situation if so desired and some new models can shoot at incredibly high sensitivity of 20,000 ISO and greater.

Image quality and light conditions will always determine the ISO used but as a rule of thumb, it is best to benchmark 100 as the norm, increasing as required. Often modern digital cameras and smart phones will set this automatically without the user even realising, however I prefer to have the student select it for the job in hand. Its not a better method, just a more thoughtful approach.

Aperture controls the ‘Depth of Field’ or DoF which determines how much of the image can be held sharply in focus. A deep DoF has the image sharp the majority of the whole scene from front to back, whereas a shallow DoF generally shows the background or foreground out of focus creating separation between the main subject and its environment along the plane of focus (see this article).

Speed (Time Value) refers to the ‘Shutter Speed’ or length of ‘Time’ a quantity of light is allowed to enter during an exposure, from when the shutter first opens until it closes. To capture fast moving objects and freeze action, a fast shutter speed is required, or for inanimate objects, or time lapse, slower speeds requiring longer exposures may be used - usually with the aid of a fixed surface or tripod.

Creativity is a personal decision to control the process to meet a desired objective. What once may have been regarded an error or mistake, can be re-applied for effect. This is where the photographer (technician) becomes the artist, using the tools available to ‘create’ images of personal choosing. ‘Seeing’ a picture, either in the mind first, or by eye in real time, is part of the visionary process needed to express ideas and emotions, or telling the story of the selected subject.

One may be criticised for lack of technical capability as a photographer, but should never be criticised for expressing creativity, since I firmly believe that it is the latter that makes you you, and therefore uniquely different from me and everyone else.

In summary, there are three critical components to taking a photograph.

1    ISO is set for the available light

2    Aperture is selected to control sharpness in the image 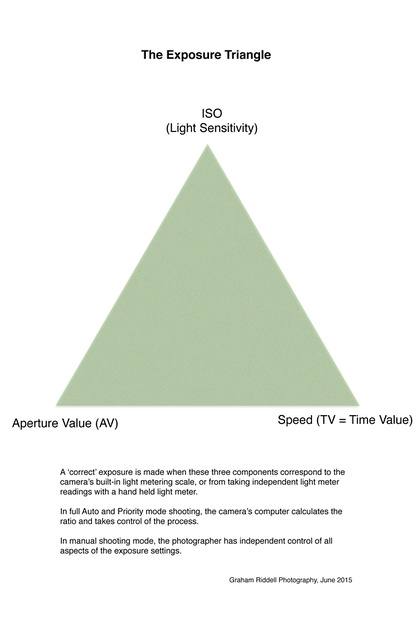