Dave ‘Ricky’ Richardson has been riding motor bikes for over sixty years and only stopped competition at the turn of the Millennium. At 83 years of age, he cuts a slim physique and is still in full control of all his faculties. 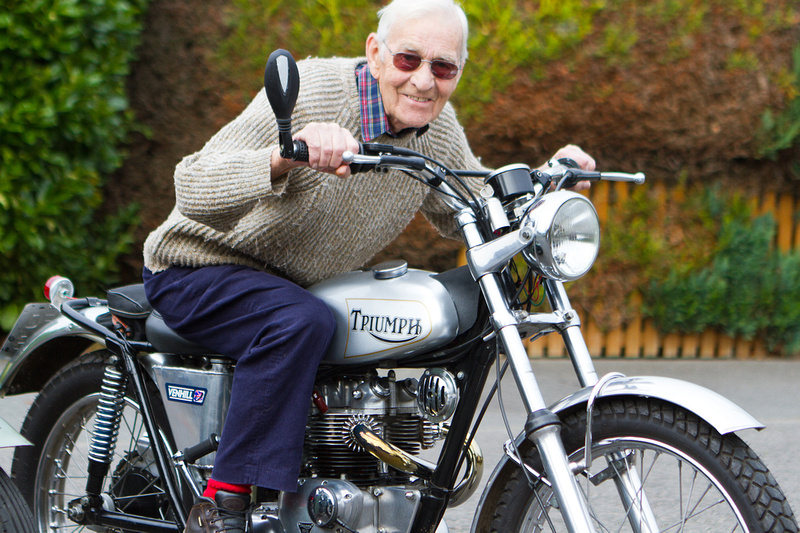 I first met Ricky whilst out and about on my own personal photo-walk searching for inspiration and was making my way back from a local pine wood when I stopped to take a picture of a house that interested me with fallen leaves and intriguing shrubbery around its gated entrance.

An elderly man walking his little white dog (Jenny - a cross between a poodle and a Bichon Frise as I later learned), came strolling up and stood directly in front of my view and exchanged pleasantries about the weather and then our conversation somehow led to the subject of motor bikes. I don’t remember how exactly, but he started to tell me about him riding old classic bikes and how he had several friends, some local, who also partook of this social and exciting activity.

Intrigued by his tales, I enquired his name and if he wouldn’t mind telling me how old he was, thinking that the bikes he drives today will be somewhat pedestrian. It took me by complete surprise when he told me he was eighty three years and had been riding bikes for most of his life.

An idea was formulating in my head indicating that I had to explore this more deeply and so I ventured to ask if he would allow me to include him in a project I have been running for several years now entitled, ‘People of the Valley’. This random collection of persona is from everyday folks I meet and who live in the Tweed Valley here in the Scottish Borders. I have been greatly impressed by the diversity of skills and talent I have thus far encountered and so was keen to include Ricky in my personal Hall of Fame!

We agreed that I should call him and arrange to meet, and if his friend was available he could join us too. And so it was that a few days later I came to photograph and interview Ricky and his friend seventy year veteran Dennis Bellville, who also brought along his vintage bike - a shaft-driven, 1951, Sunbeam 500 incline twin, in classic war-time green.

Dennis had kindly come over before having to head back to his part-time job later in the afternoon and I was grateful for the opportunity to photography both these wonderful characters with their bikes and thereby archive another small piece of local history. 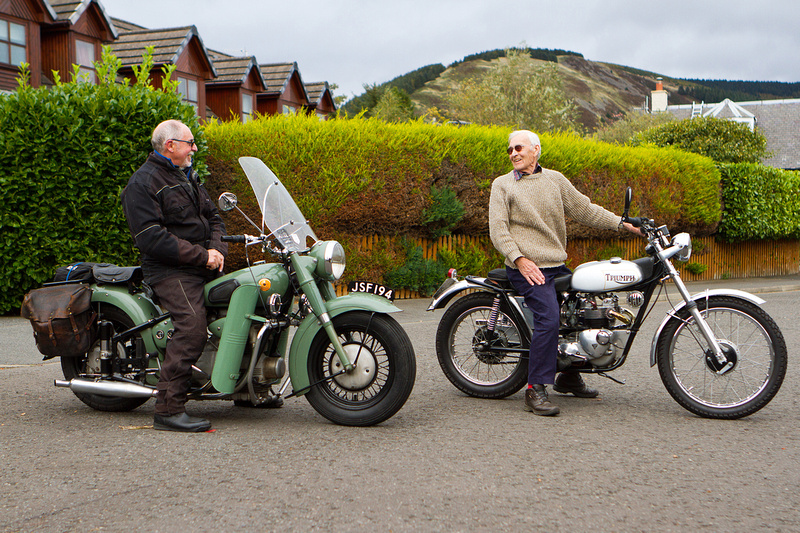 Two veteransRicky and his friend Dennis Bellville on their bikes 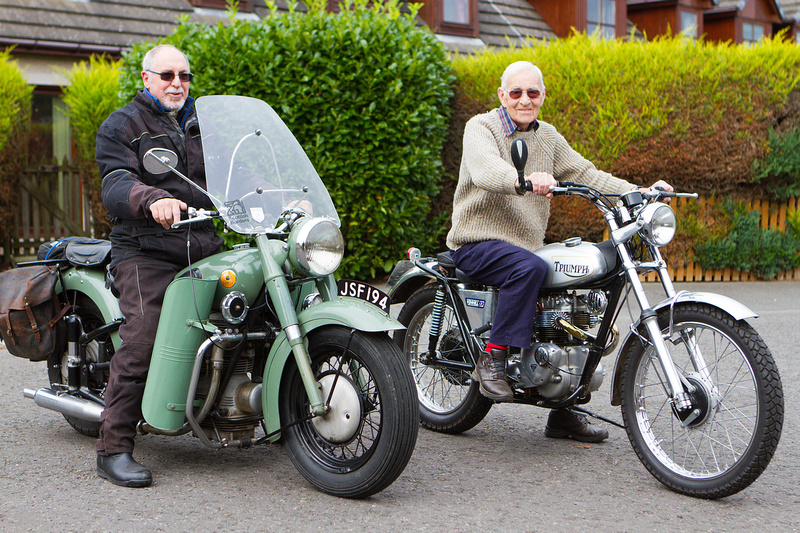 The Sunbeam and the TriumphGreen Sunbeam 500 & Silver Triumph 21

As Dennis putted off into the distance to return to work, I took a few more shots of Ricky with his wonderful 1962, silver Triumph 21, four-stoke twin, which he had bought in 2016 ‘unseen’ and to his dismay arrived as just a box of parts. He set about rebuilding it, even hand-crafting a new oil tank. The result is a spectacular, light-weight machine that beams with as much pride as Ricky’s satisfied smile.

His collection didn’t end there though. Next he showed me another classic he had personally rebuilt, a stunning, blue 1962 Triumph T100 - a 500cc four-stroke twin which came to his possession in 2008. A friend had contacted him about an old machine in need of some TLC. When he told him the registration, Ricky quickly realised that this was was a bike he had previously owned and sold, back in 1963, and so acquired it back and set about rebuilding it and has brought it back to life and its former glory.

Whist his silver Triumph 21 is a favourite, he never rides it far from home as the petrol tank capacity is limited and he once ran out of fuel when out on a ride. Fortunately he was close-by to a friend and walked a mile or so to his house where he was able to get assistance.

The T100 however has been on long touring rides to the western Isles including Mull and Skye and also down to the Lake district. 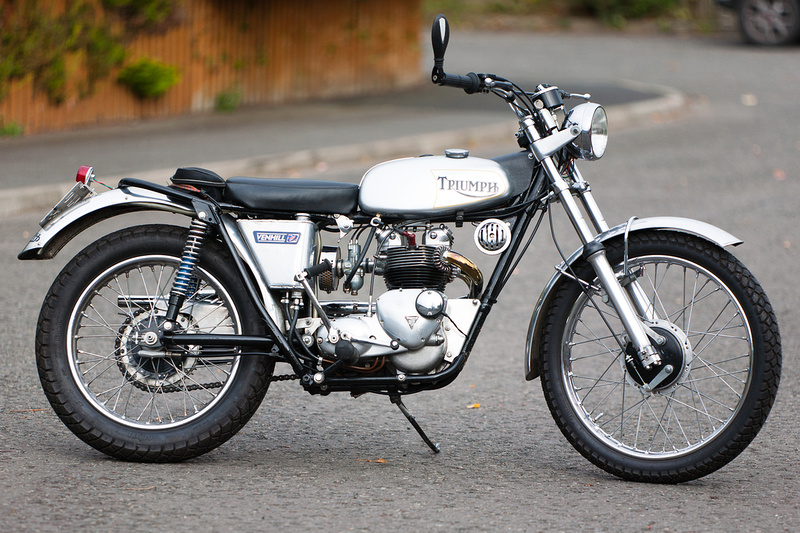 1962 Silver Triumph 21Lovingly restored from just a box of parts which he bought unseen. 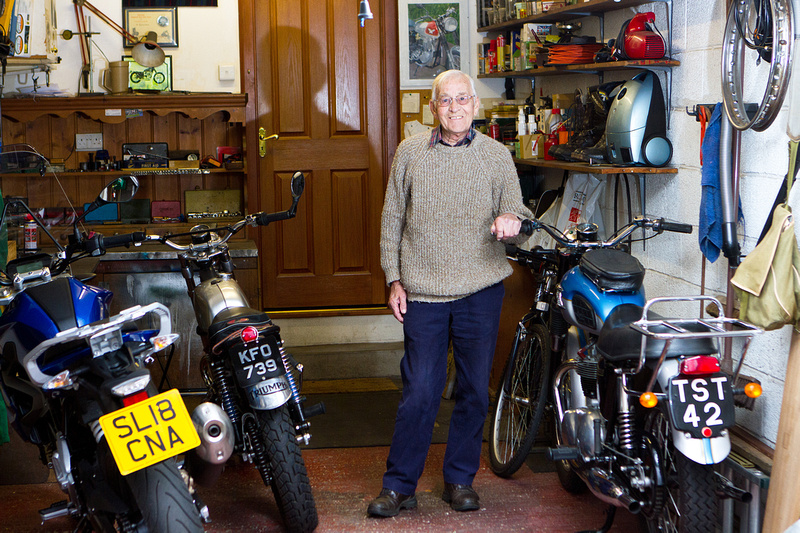 What's in your Garage?Ricky in his workshop with his three bikes, tools and spare parts.

Ricky’s skills are not confined to only riding motor bikes. At the age of fifteen on leaving school he served his apprenticeship as a coach-builder at the famous K&I Coach-works in Dalkeith, Midlothian, Edinburgh, where he grew up and learned vital skills that were to serve him well through his career. He suffered a serious injury while working there shattering his leg, and the physiotherapist recommended he take up road cycling. He did and fell in love with the two wheels mode of transport getting into motorbikes in his early twenties.

At the age of twenty, he began his two year National Service with the Royal Navy serving on aircraft carriers (HMS Bulwark (R08) and HMS Centaur) as an aircraft mechanic, when on occasion he famously repaired the catching mechanism for the incoming Sea Hawks and single prop Gannets, after one had become snagged by one plane’s propeller whilst attempting the hazardous landing, thus ensuring the fleet and ship remained operational.

Motor cycles caught his imagination and he began learning new riding skills in Reliability Trials, firstly in the Novice Class then progressing through to the Non-Experts Class and finally the Experts Class with several wins along the way. Modest about his past successes and achievements in these classes, he did remind me of his final win back in the late 1990’s at the ‘Grey Beards Trial’ - a one-day event near at White Adder near Gifford.

Through the 1970’s up until 2005, Ricky remained an active endurance rider competing in Motorcycle Reliability or endurance trials with two Edinburgh teams, Edinburgh Southern and Edinburgh St George.

On one famous outing with his trials pals with Edinburgh South Motorcycle Club, they scrambled up to the top of Ben Nevis, then took a trophy photo of themselves with one of their bikes, a Spanish built OSSA 250cc two-stroke machine, perched on top of the trig-point with one rider on top and the others around each side. With a humorous glint in his eye and dragging on another JPS Blue cigarette, he passed the photo to me saying that it might just pass the Guinness Book of World Records for the Highest Motorcycle in Britain! 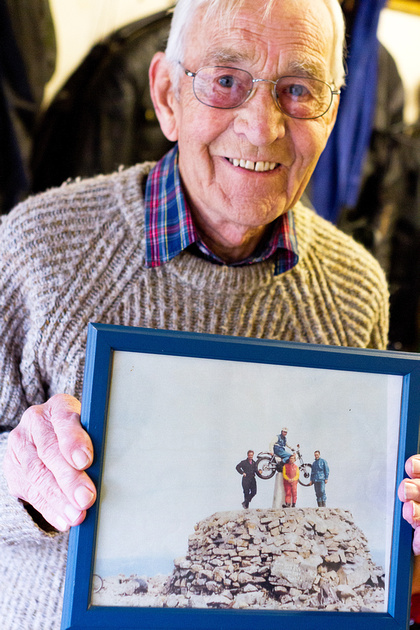 Happy MemoriesRicky with his photograph from the Ben Nevis expedition

Ricky moved down from Dalkeith to Peebles here in the Scottish Borders with his wife and continued to commute to work, then on retirement they moved to Ellibank Gatehouse before finally settling in Innerleithen in 2000 where is was able to help care for his wife who has sadly now passed away.

Approximately 26 years previously he and a group of close friends, started the Lothian & Borders Classic and Vintage Motorcycle Club which met at the Leadburn Inn until it was destroyed by fire in 2005 by a tragic motor accident. They continued meeting after the Inn was rebuilt until the owner, himself a bike enthusiast, acquired new premises in Eddleston earlier this year. However the Inn didn’t have the required parking facilities for a mass bikers' gathering and so today the club meet at the Black Barony Hotel also in Eddleston, on the second Thursday of the month. They also have an active Facebook page.

But Ricky had yet one more surprise in store for me.

Far from being an elderly gentleman pottering about on his old classic machines, he just bought himself a new BMW G310, a single cylinder, 313cc roadster with rear exhaust outlet which he plans to go touring on next summer, especially if the weather is as good as this year. And true to form, he had modified it by adding a new rear mudguard. 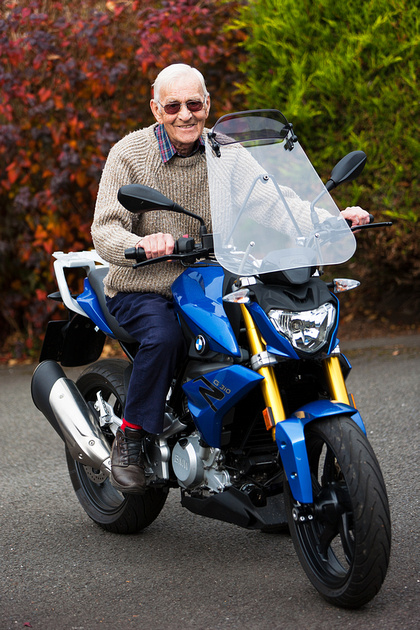 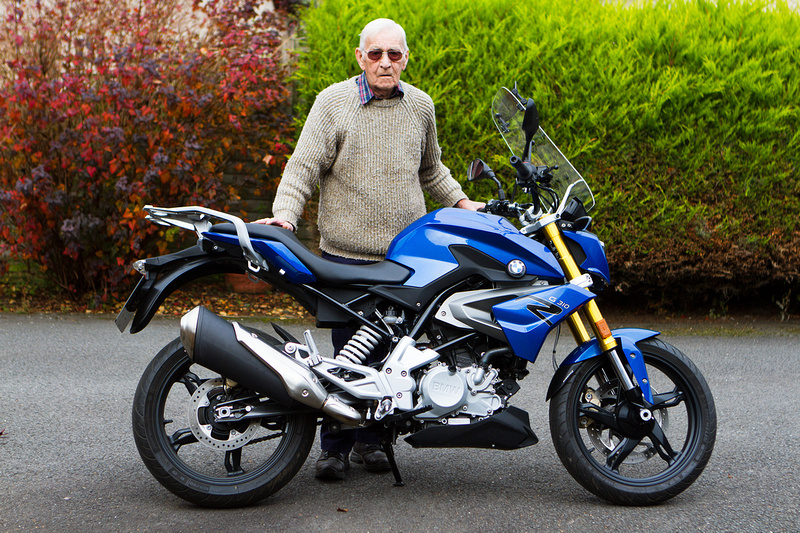 BMW G100Elevation of his new machine.

For my part, I want to thank Ricky for sharing part of his story with me and I wish him many more years of happy, safe motoring. 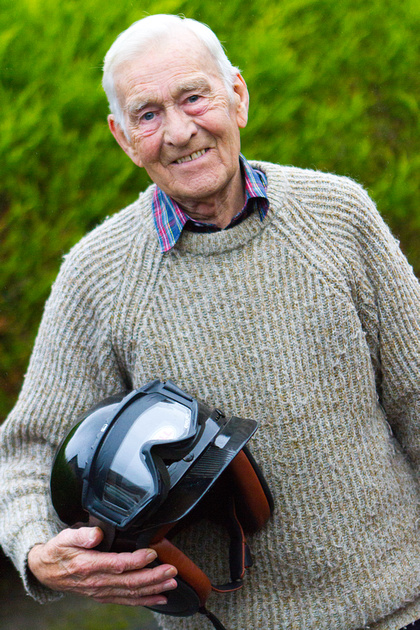