Hidden inside the Henry Ballantyne Institute (known locally as the HB Club), in the small village of Walkerburn in the Scottish Borders, is one of those amazing art treasures that are only well known to those who are familiar with the club and its activities.

For years I had been asked by locals if I had ever seen the wall painting inside the club and I had to confess that I was not familiar with either. I did though make a mental note to go in next time I was passing or out walking in the area, however the years rolled on without gaining access when the club was open.

Following a quiet spell at work recently, I vowed to go in and see it for myself and made a quick trip over having contacted the club via their social media Facebook page. What I saw there made a lasting impression and I just knew I had to add this to my project list and preserve it for the world since very little information could be found about it anywhere online.

The only place where I have seen anything similar was in the Royal Circus Hotel in Edinburgh over thirty years ago and long gone now I think.  It had an oval, tented (circus) bar with an ‘audience’ looking-on representing the numerous locals who drank there.

The Henry Ballantyne Institute was constructed in Dumfriesshire red sandstone by David Ballantyne in 1904 to the memory of his father, Henry Ballantyne, who established the textile mill there in 1846 and later had housing constructed for the workers and the Ballantyne family by architect Frederick Thomas Pilkington, thus creating the village of Walker Burn. It was originally opened as a Reading Room and social centre to provide knowledge and entertainment to the local workforce and was run by a committee of locals. 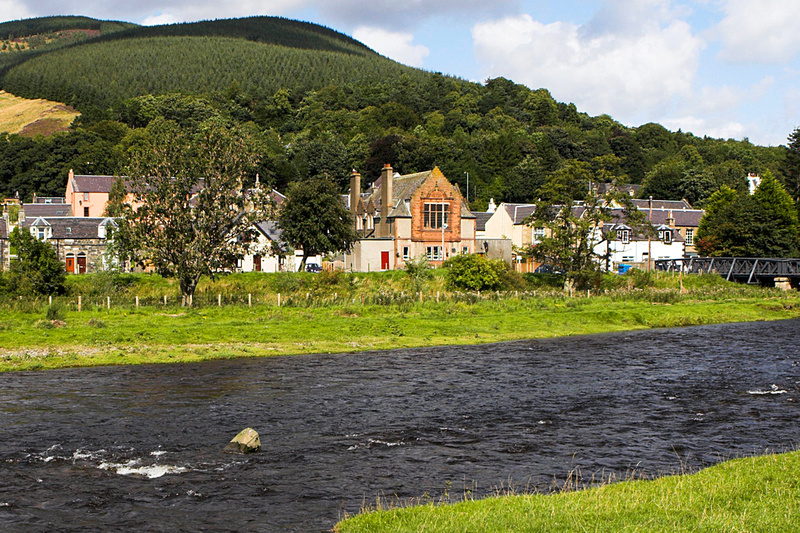 In 2000 it was handed over to the community from the Ballantyne Family Trust and has operated independently since then as a charitable organisation providing refreshment and entertainment to the local community.

Inside, the mural occupies the eastern wall in the rear lounge bar and celebrates the lives of the many local characters who have supported the club over the years. It was painted by local fine artist Alan Liversedge and he employs various themes from the Arts and cultural events to represent them.

Classic scenes such as the iconic 'The Reverend Robert Walker Skating on Duddingston Loch’ by Henry Raeburn, are depicted and the entire concept delivers an abundance of self-effacing humour in a wonderfully rich historical context. The effect is to connect the Arts to Walkerburn through a visual montage of performances, events and historic iconography of the club’s patrons who have graced its environs over the years and who were its most supportive and colourful local characters at the time of painting.

Many of those characters are no longer with us today but their legacy lives on through the artist’s imaginative representation of them in his masterful mural.

My thanks to HB Club for their permission to write this, particularly ex-club treasurer Ronnie McCudden and club secretary Mags Henderson, Walkerburn History pages at www.walkerburn.com/History for a little context and not least to the artist himself Alan Liversedge for making such a wonder piece of art.

Graham Riddell Photography - Freelance & Fine Art Photographer
Gosh Robert, who would have guessed you would find my blog. The Ballantynes have a strong connection still to the area. I am no historian, but Sarah Ballantyne from Walkerburn was married to Jeremy Ballantyne (now deceased) and she may have information that could help you. Let me know if you want her contact details. Thanks for posting.
Robert Norman Ballantyne(non-registered)
Henry Ballantyne was my great great grandfather. I have visited Walker Burn unfortunately the club was closed. My late father was named after him as was my great grandfather. My father being the last in the line to be named Henry. I only carry the middle name of my grandfather of Norman. I am also the last in the line .
Graham Riddell Photography - Freelance & Fine Art Photographer
Don't see why not.
Dianne Smith(non-registered)
Can I visit this next time I'm down?
No comments posted.
Loading...
Graham Riddell Photography Blog
Subscribe
RSS
Recent Posts
ITV Borders feature on Border Life Such a Perfect Day - at Traquair House One Woman and her Dogs Sacred Spaces Cold Water Swim or Cold Feet? The Hedge-cutter that wasn't “I wanna tell you a story” Turning a Crisis into a Creative Opportunity Rainbow Valley - Scottish Borders Dr John Laidlaw FRCP, Abstract Painter & Artist
Keywords
Scottish Borders photography blog Scotland landscape art how to nature basic photography uk
Archive
January February March April May June July August September October November December
© Graham Riddell Photography - Freelance & Fine Art Photographer
User Agreement
Cancel
Continue