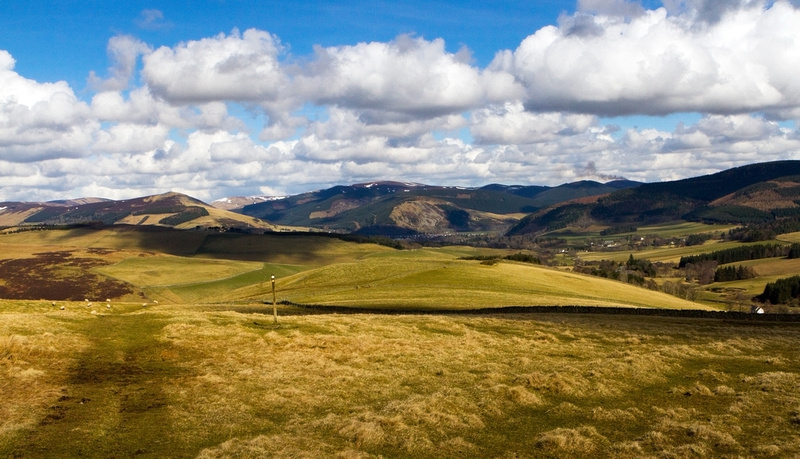 Along the Way-0721Heading north on the Southern Upland Way across Blake Muir and Newcraig Hill towards Traquair and In the distance, Innerleithen. Southern Uplands, Scottish Borders, Scotland, UK.

The weather has been, well, to put it mildly, mixed recently between freezing easterly chills accompanied by snow to pleasant warm spring sunshine and green fields, so it was with a determined heart that I set off on Thursday 29th March 2018 for another local excursion as clear skies and hills suggested a more promising opportunity to get some new stock images in.

I set off from the car park at Traquair Kirk south of Traquair at Kirkhouse which is the meeting point of the Southern Upland Way walk from St Mary's Loch 12 miles further south and the B709 Innerleithen to St Mary's Loch road. 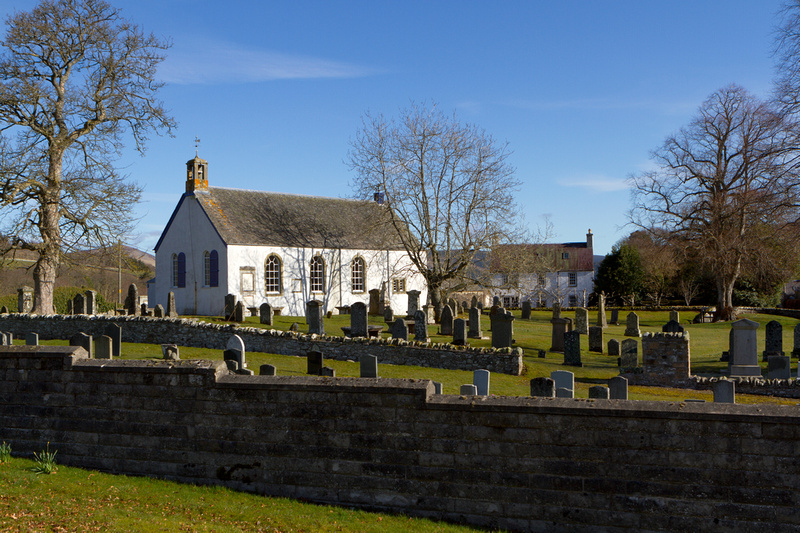 Access was next to two cottages beside the car park in the southern side and a small farm track eased up behind them leading onto the rising hillside above. I am definitely not as fit as I once was and carrying my two digital SLR's and their heavy glass lenses added a further 10 kilos (1.5 stone) to my already overweight frame.

Where once I used to leg-up hills with relative ease, I now have to set a more leisurely pace of between one and a half and two miles per hour (uphill) and just try to keep on going. The first half mile is always the worst as my legs question what the hell I am doing to them again! So off I plodded stopping as required to check my progress and any views that may present themselves (or just to recover!).

This would be an up and down walk, returning by the same route as I hadn't brought my map with me and I wasn't entirely sure which hill I was actually on. I last walked here over ten years ago with a friend over to the other side but had no intention of repeating it this time. The farm track gradient up was long and progressive, steep in parts and as I pushed further up, the rolling landscape of the surrounding hills came more into view. I was focused on getting to the top of what I thought was a local landmark that I can see from my house, but as it turned out I was in the wrong location for that and as it stretched out before me I was beginning to have second thoughts about making it up there at all. In reality is was just a couple of miles to where I was heading but somehow it seemed further, much further. 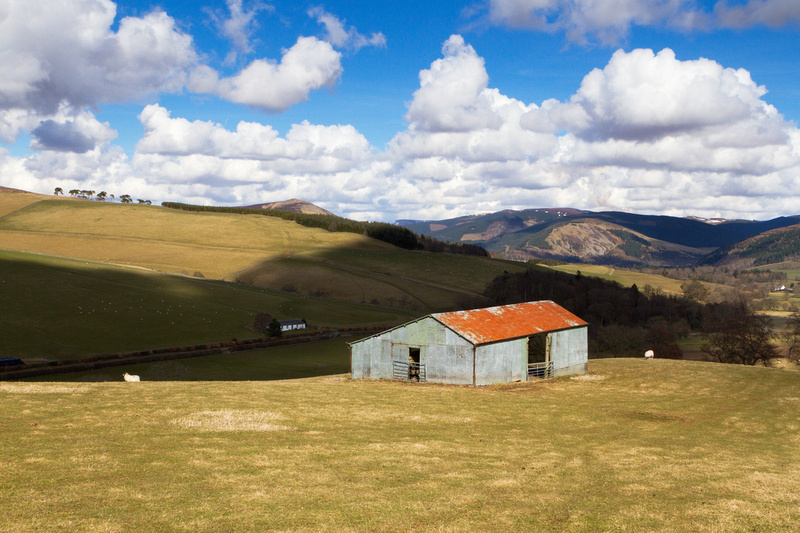 Taking one of my frequent 'breathers' I was able to get a glimpse of where I actually was. Looking back towards the north east there was an open farm gate on my right inviting further inspection. From there in the distance I could see the peak of our local hill Lee Pen and the scarred side of Pirn Craig to its right and the higher peaks of Priesthope Hill, Glede Knowes and possibly Windlestraw Law in the distance which at 659M (2,284 ft) is the highest peak in the southern Moorfoot Hills. Below me was the farm at Orchard Mains and the road to Glen Estate whilst and in front, a weather beaten corrugated iron shed with a flaking orange roof which added something 'artful' to the scene.

Turning back to the rising farm track I was following, the assent steepened to a brow of a hill. On either side were trees. Forestry on my right and some determined hawthorns to my left. These twisted forms of the hawthorn made me think more about their fight for survival. Clearly the landscape can be brutal and unforgiving at times as winter storms take their toll. I was impressed by their crooked determination to survive and in just a month or so, they would be in full bloom with white blossom. It was a thought to cherish. 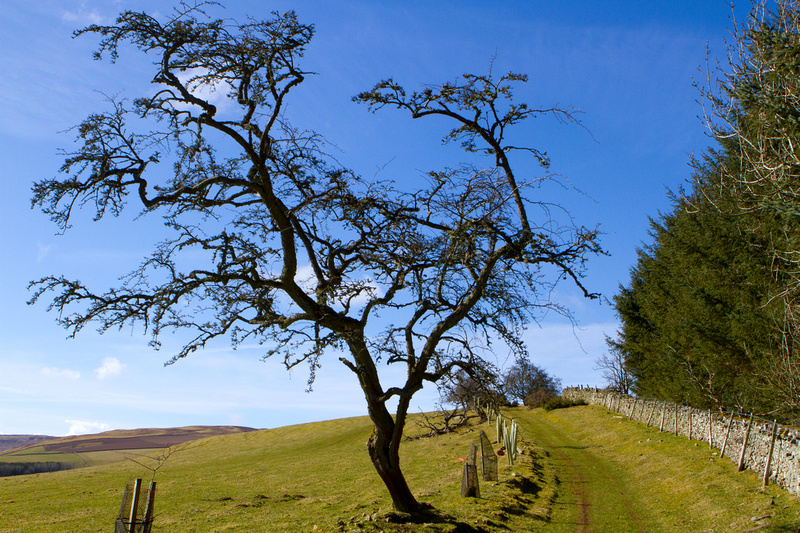 Onward and upwards I plodded until the track gave way to a more open landscape with the broad back of Newhall Hill and Blake Muir beyond. From there I could see my destination in the distance. Somehow it seemed further away. Would I have the time and energy to get up there I wondered? feeling tired already and the weight of my camera gear and gravity pulling me back down. Normally this would be a fairly straightforward walk for most, but I was not at my fittest and my 60 years were reminding me that I was no longer an agile gazelle. 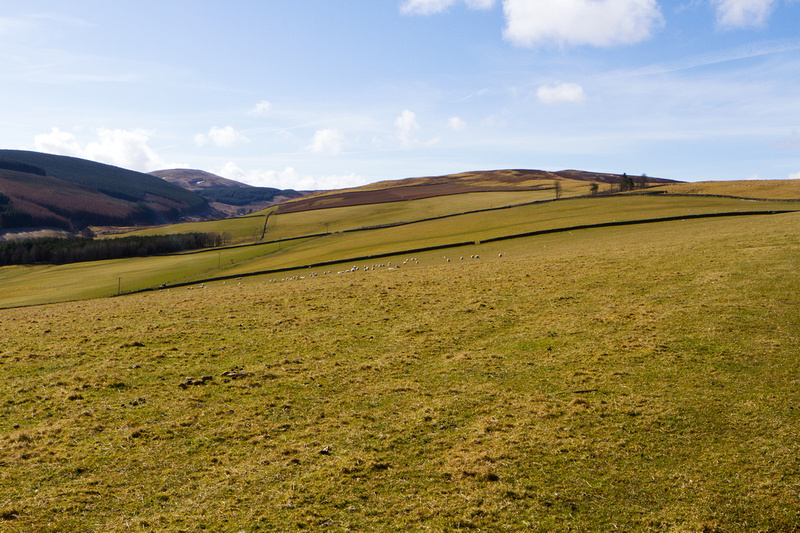 Newhall Hill to Blake Muir-0590Looking south towards the summit 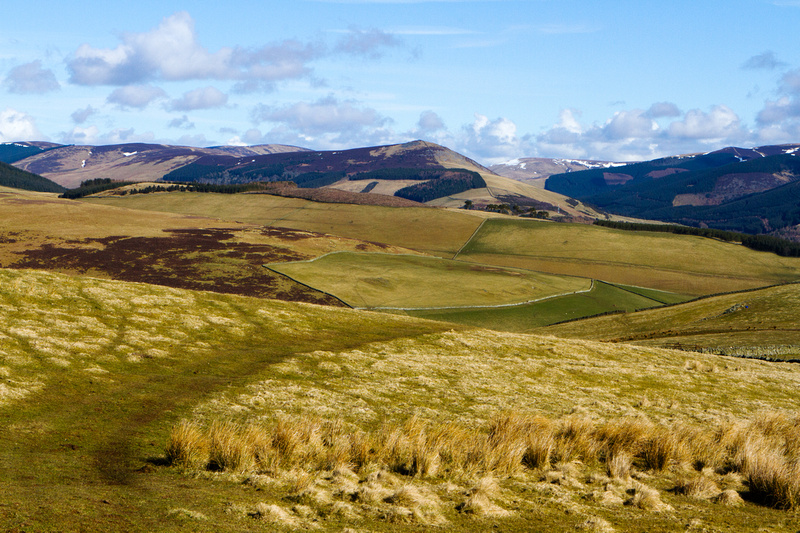 As I progressed ever upwards I would occasionally stop to look back to see how far I had come and it was then that I began to release the real joy of this trip. The views back towards Traquair and Innerleithen were wonderful with the soft rolling Borders hills stretching out before me.

Over to my left from this viewpoint the hillside fell dramatically into a steep glen. The importance of which was to keep that place a hidden secret far from prying eyes. No wonder then Royalty and dignitaries used to visit there in bygone years at the impressive Scottish Baronial style Glen House and Estate which is home to the Tennant family. At the head of the glen is Loch Eddy, the source of the Quair Water, from which Traquair takes its name (hamlet on the Quair Water) as it converges with the river Tweed on the northern banks of the historic Traquair House's grounds further down. 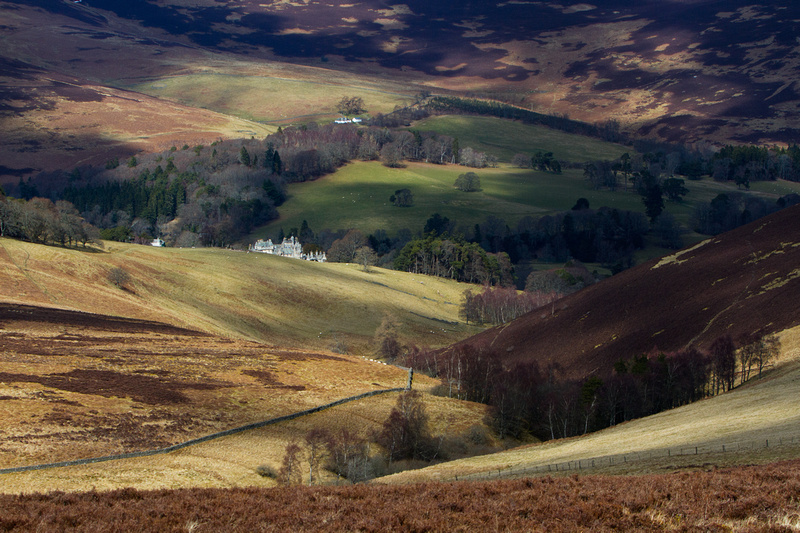 A Dappled Land-0666Looking down to Glen House from the high plains of Blake Muir on the Southern Upland Way, Scottish Borders.

As I stood and watched the arriving clouds converging and floating overhead, their shadows flickered across the curvaceous landscape beneath the mid-day sun, creating an interplay of light and shadows dancing and weaving around the glen. It would be easy to just sit down and take it all in but I was on a mission to get to the head as soon as possible and so I left the Glen to its secrets and climbed onward towards my prize.

Progressively, more of my distant hometown gradually came into view and so at the next way marker I stopped to reflect on how far I had walked. I could just make out Innerleithen sitting in the Tweed Valley in the far distance whilst ahead awaited the more troublesome high heather mounds of Blake Muir. 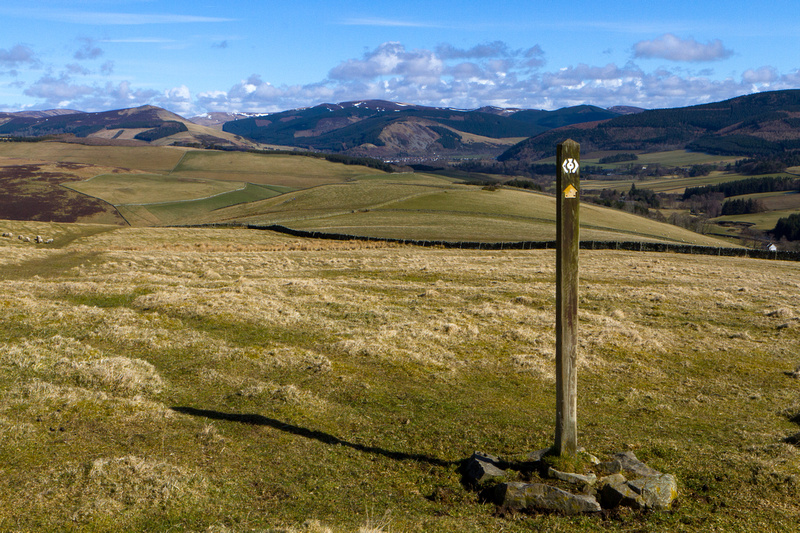 The Way North to Traquair-0600 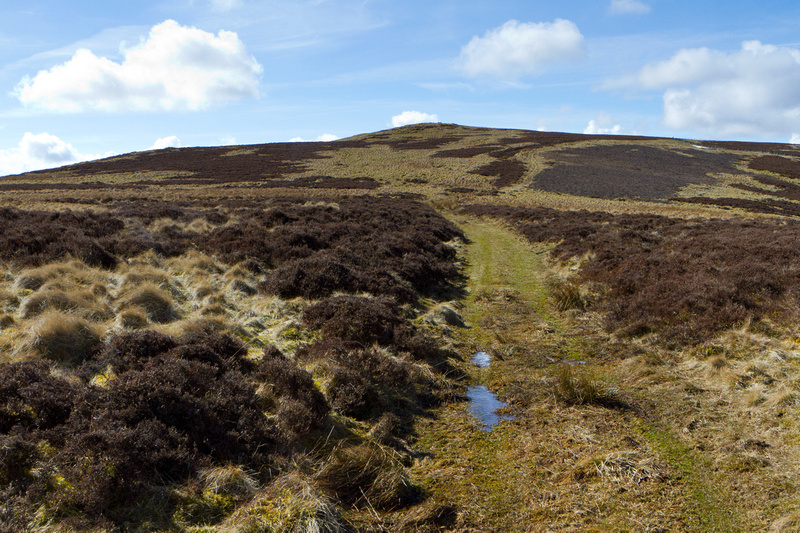 There is a certain feeling you get as you near the summit of an endeavor like this no matter how small or great the challenge. It is a sense of accomplishing something that began as an idea and was now a living reality. I was on the hill where earlier I had only thought about being there. I felt spurred on and could see the summit up ahead. The ground to either side was difficult terrain to walk through and my guest had one more surprise before letting me join her. Where the path turned to curve around the top, I had to leave it there and find a sheep track which was winding its way through the lumpy heather and grassy mounds.

Then there it was. A small cairn to mark the head of this particular land formation. 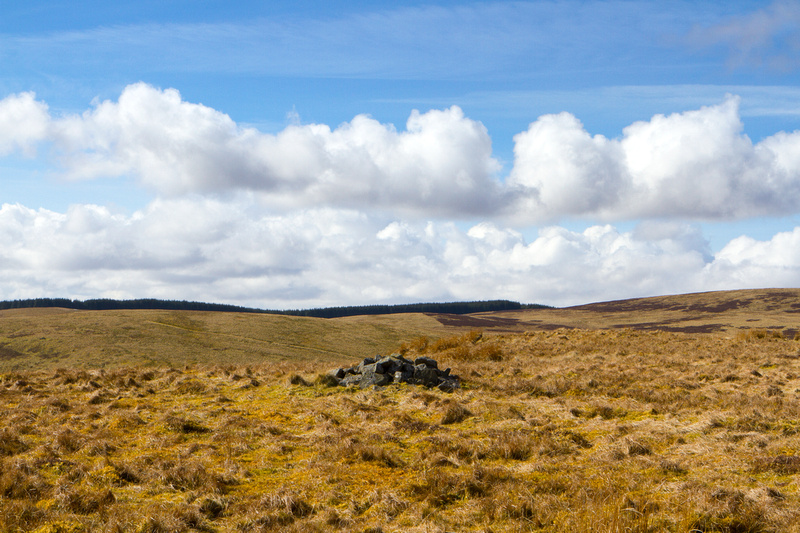 Blake Muir Cairn-0611The cairn summit of Blake Moor on the Southern Upland Way St Mary's Loch to Traquair route. The Way cuts across the middle distance to the forestry beyond before dropping down to the Loch side.

Up ahead the path continued towards the distant treeline which I remembered from my previous walk was the point at which the drop down began to the A702 Selkirk to Moffat road and the head of St Mary's Loch. It is generally from there that walkers come along The Way heading for Traquair before turning east on to Yair, Galashiels, Melrose and so on. The whole vista opened up here and I was afforded panoramic views all around. Opposite on my east were the remnants of Cultivation Terraces and sheep pens and tha road from Innerleithen stretching down past Glenlude Farm, whilst the higher snow capped planes of Glenrath Heights and Dun Rig were to my west, and then back round to the full landscape of Innerleithen nestled within the Tweed Valley. 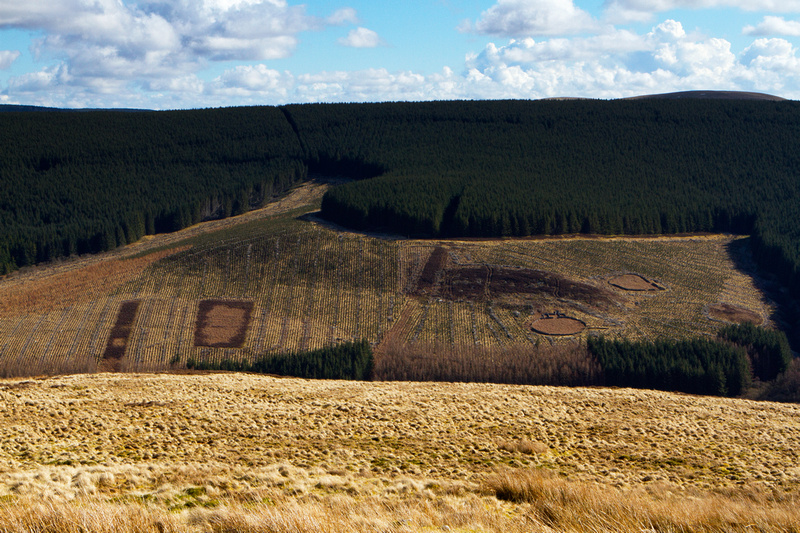 Cultivation Terraces-0613Cutivation Terraces and sheep pens revealed again after deforestry logging operations on the forest at Curly Moor on the east side of the B709 road to St Mary's Loch from Innerleithen. Scottish Borders 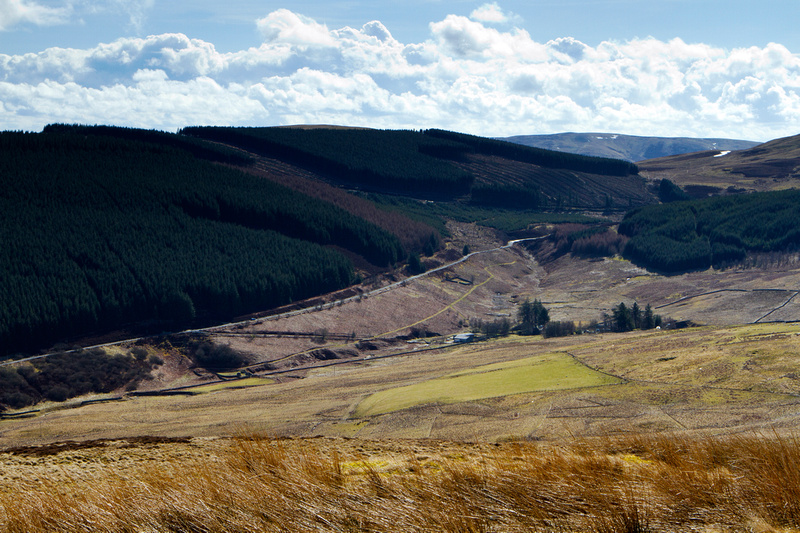 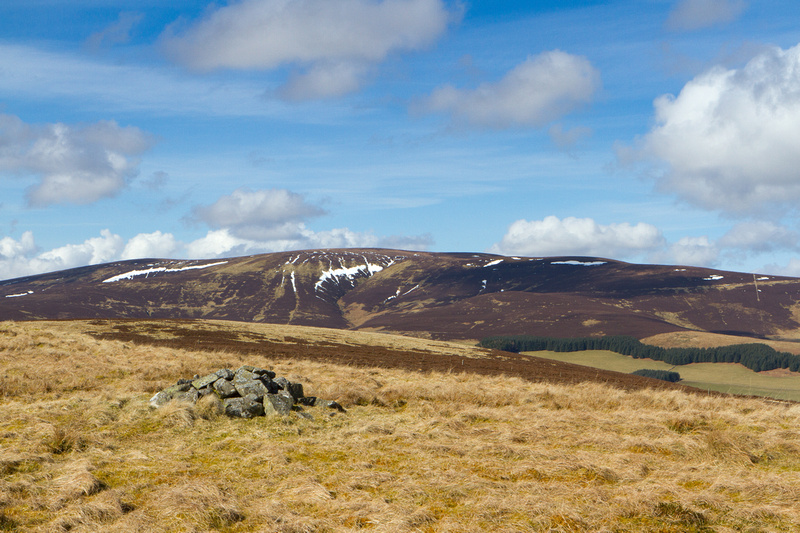 Dun Rig & Stob Law-0614Cairn atop Blake Moor on the Southern Upland Way and looking across to Dun Rig and Glenrath Heights. Scottish Borders 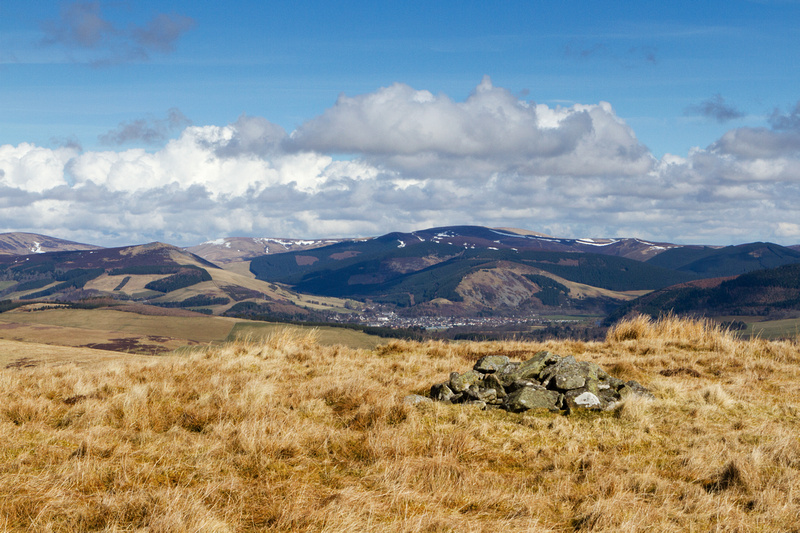 Blake's View-0635From the cairn at the top of Blake Muir looking back to to Innerleithen and the Morrfoot Hills beyound. Scottish Borders, Scotland, UK

After less than an hour and half from setting off it was time to say farewell to this beautiful spot and so headed back down whenst I came, soaking up the views over Blake Muir & Fethan Hill and the cosseting hills that surround my home town and which form the lower reaches of the Moorfoots.

Along the Way-0721Heading north on the Southern Upland Way across Blake Muir and Newcraig Hill towards Traquair and In the distance, Innerleithen. Southern Uplands, Scottish Borders, Scotland, UK.