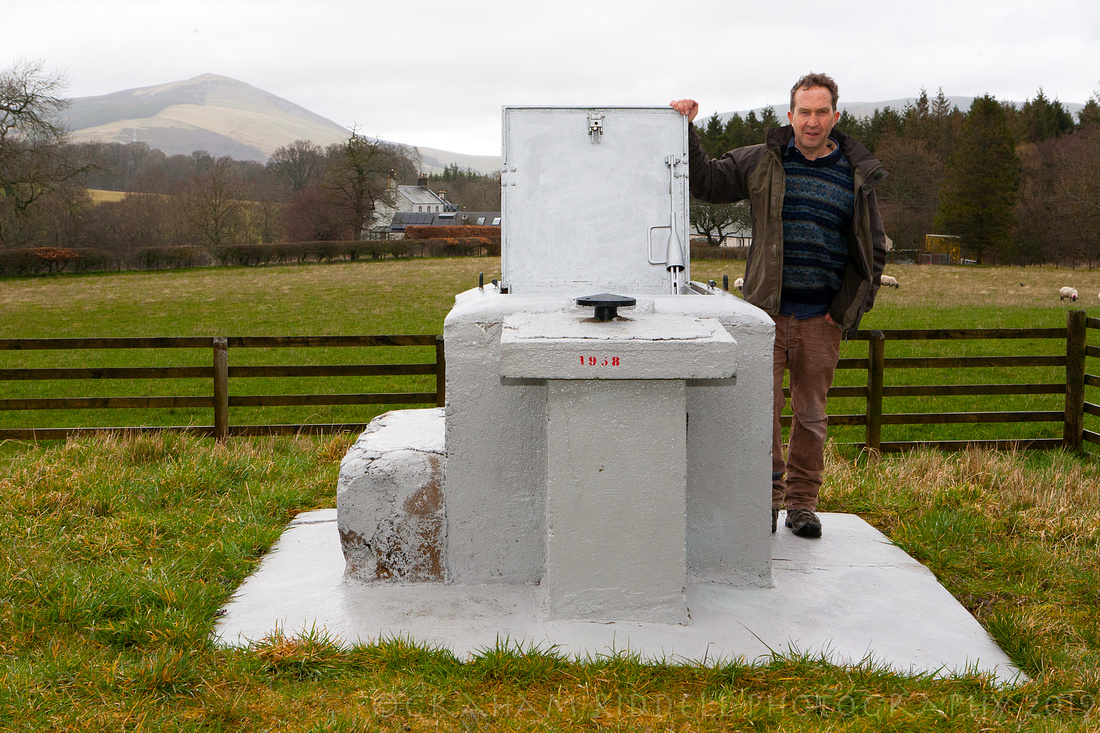 Traquair Nuclear Bunker-0323Terry Glancy at the open shaft that leads down fifteen feet to the nuclear bunker below. Traquair, Scottish Borders, Scotland, UK. Build in 1958 as a main hub of three within a larger grid network covering the Bordrs up to Edinburgh.

Those of you who remember the Cold War post WW11, will remember the very real threat of a war to truly ‘end all wars’ as the Cuban missile crisis in October 1962 brought America and the then USSR (today’s Russia) to the brink of Armageddon. It was averted only when the US President Kennedy agreed to President Khrushchev’s offer to remove all the Soviet’s nuclear missiles on the condition that the US did not invade Cuba. Fortunately for us, the agreement held and sense prevailed.

Had such an exchange taken place, Britain was already prepared (as far as anyone could be), with a network of nuclear bunkers, strategically placed around its Isles.

It therefor came as a bit of a surprise to me recently, to learn about a nuclear monitoring station bunker within close range from where I live.

A contact Facebook group ‘Attack Warning Red, Scottish Borders’ had posted online about an unusual event showing the harrowing 1984 docudrama film “Threads’ about a nuclear war and its effects on the city of Sheffield, England, and was showing it to a small group of intrepid souls later that month in a renovated nuclear bunker facility locally.

This I thought was too good an opportunity to miss and to follow-up on and I decided it would make a great addition to my  ‘People of the Valley’ project and a write-up on my website Blog post.

So it was that I came to meet Terry Glancy, an international IT consultant from Walkerburn, on a wet afternoon on 22nd March 2019. 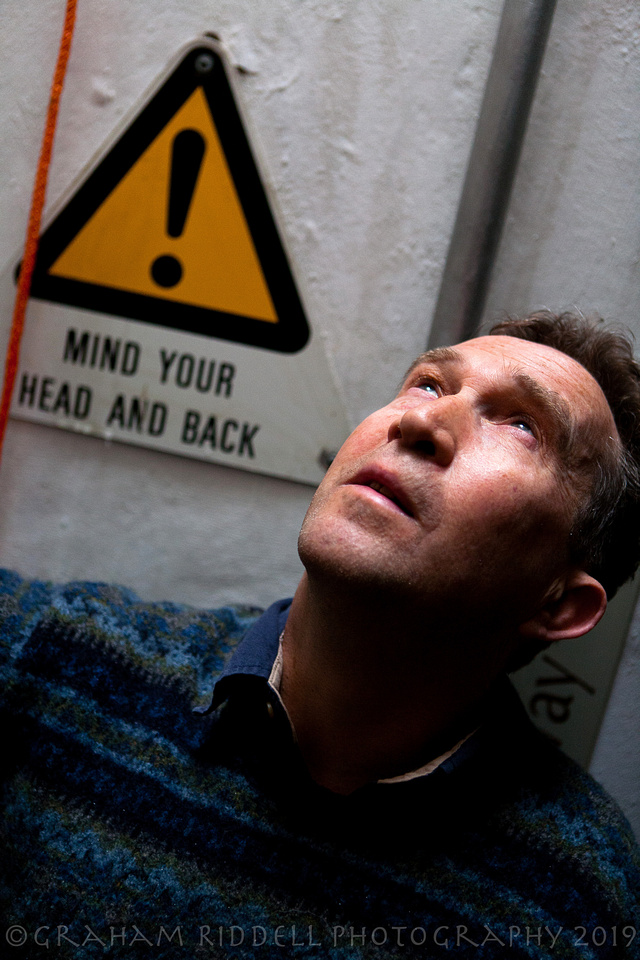 Terry had bought the bunker from the previous owner, John Letham, who acquired it in 2003, and was now residing in the Philippines. He had originally intended to convert it into a quirky holiday home however those plans fell through and so in stepped Terry who saw an advert in the Scotsman newspaper, 26th May 2018 edition. ‘Yours for £20,000: Cold War bunker with potential to become quirky holiday home’ and bought it the following month.

Since then, Terry has been cleaning up the place which was left in almost time-capsule condition with an original table, canvas folding chair, teapot, cooking pot and kettle, chemical toilet, original fuse box, a zinc and an enamel pail (bucket), and cluster map showing the locations of other sites in the network.

The original flaky, external green paint has been repainted white and the floor inside matt black. The walls were lined at some point to provide more insulation and the floor had a rubber membrane applied to keep the cold damp from rising.

Built in 1958 on land acquired by the Ministry of Defence (MOD) from Traquair Estate, as a nuclear monitoring post for the Royal Observation Core (ROC) to check radiation fall-out in the event of a nuclear war, the bunker was linked to a series of cluster cells each feeding information back to HQ in Edinburgh. If the main line went down then the master bunker would communicate over radio frequency. Designed as a two-man base, the prospects would not have been favourable for either of them in a hot war situation.

Entrance is from a fifteen foot vertical shaft with a steel ladder which at the bottom has two rooms leading off it and there is a hand water pump to extract residual water from the floor. One room is more of a cupboard and may have housed the chemical toilet, and would have been used as a decontamination room. The other larger room was where the main operations would have been conducted from. It was connected to the outside world via a direct telephone line and in fact, British Telecom (BT) had also previously owned the site for a potential aerial mast but this became surplus to requirements. 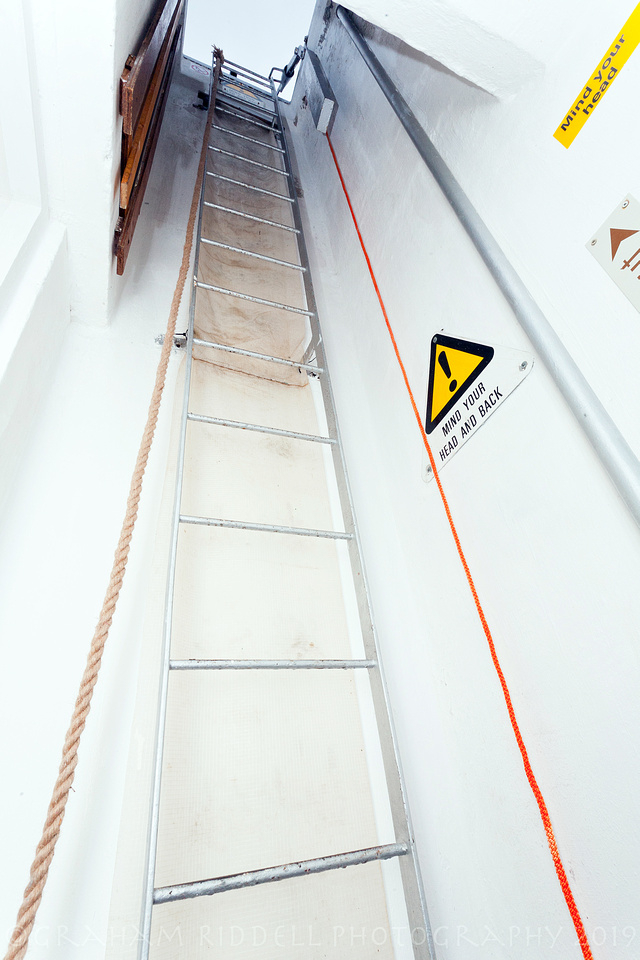 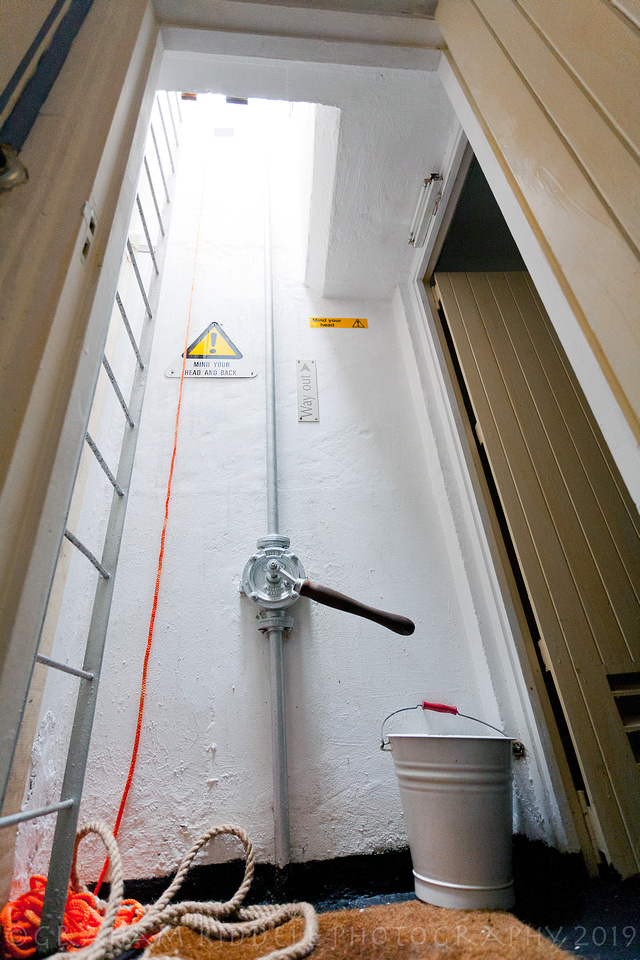 Traquair Nuclear Bunker-0308If water did seep into the structure, this hand pump would have been used to pump it out. A vertical shaft fifteen feet deep with steel ladder drops down form the entrance point above.

When inside, I discovered some of the more chilling artefacts from the nuclear age. On the inside of the main room. next to the door, were two bottles. One contained Sodium Chloride (for decontamination washing) and the other alarmingly labelled 'Emergency Eye Wash'. At the far end of the room was a light shaft with a steel sliding door containing a mirror which acted rather like a periscope. The steel door though was to be closed in the event of fall-out being present! 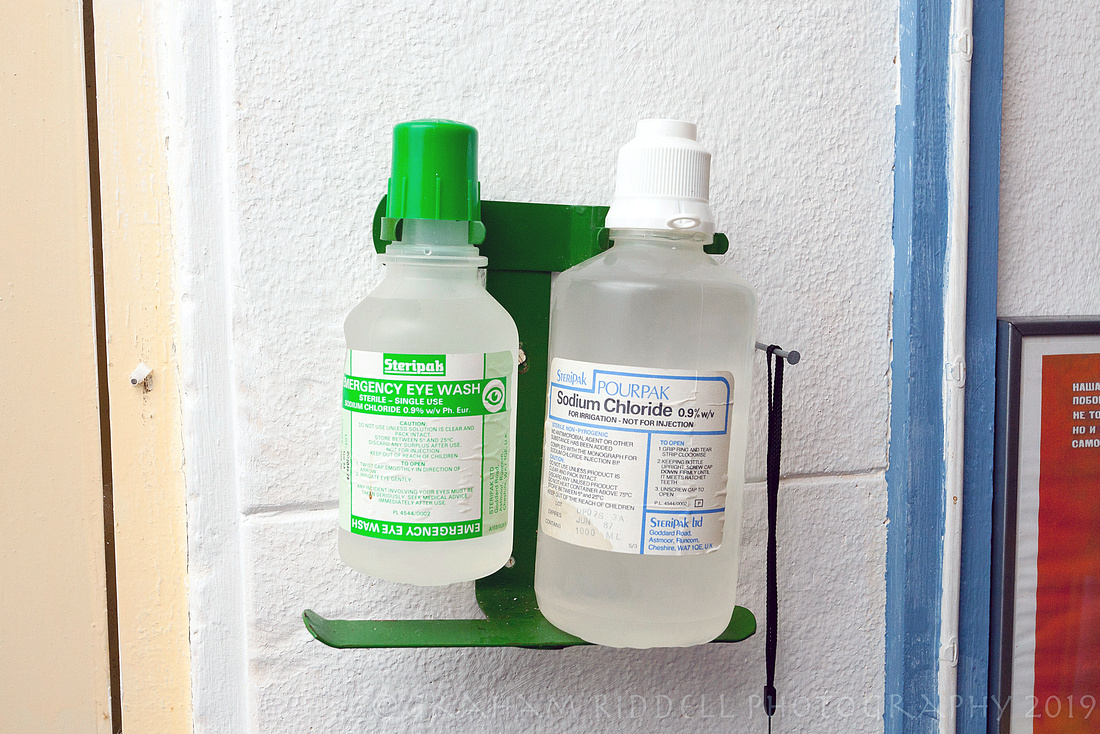 Traquair Nuclear Bunker-0285Chemicals used for washing down contamination and emergency eye wash in the event of exposure to radiation fallout. 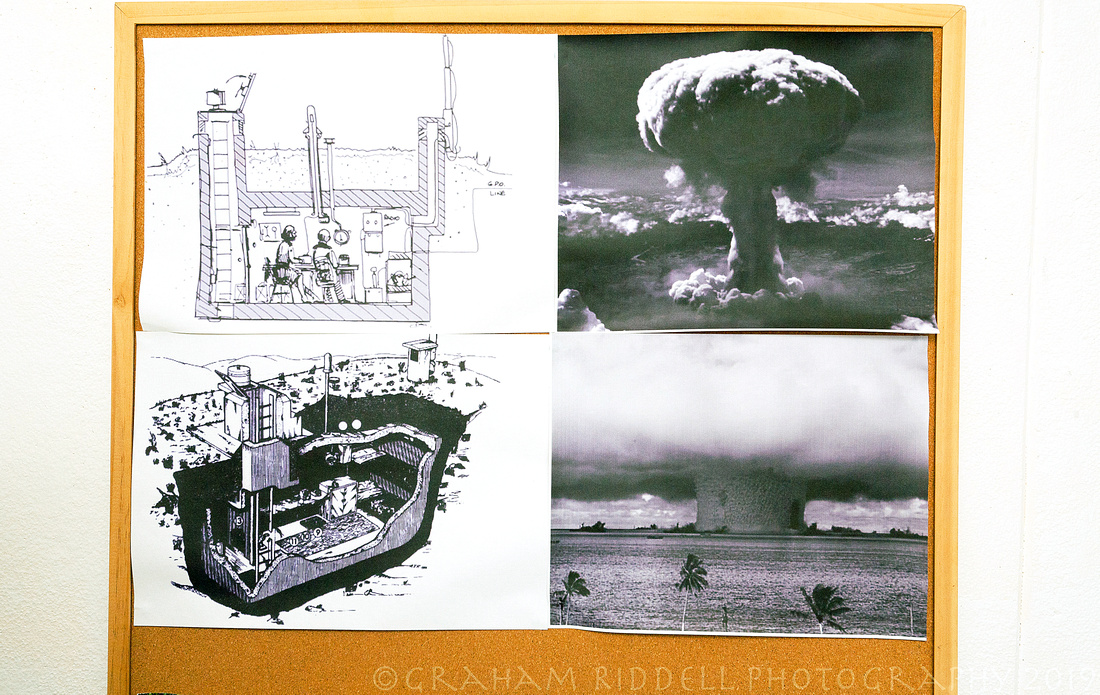 The original folding canvas chair sat in front of the wall table and on the wall in front were drawings and pictures showing the facility design plan and atomic explosions (in case you never saw one!) and a map showing the clusters of bunkers in the Forth and Borders areas. The images reminded me of my childhood growing up in the Nuclear Age as I too had many photographs of test explosions on my wall and a small cupboard into which I escaped the world, into my secret bunker! 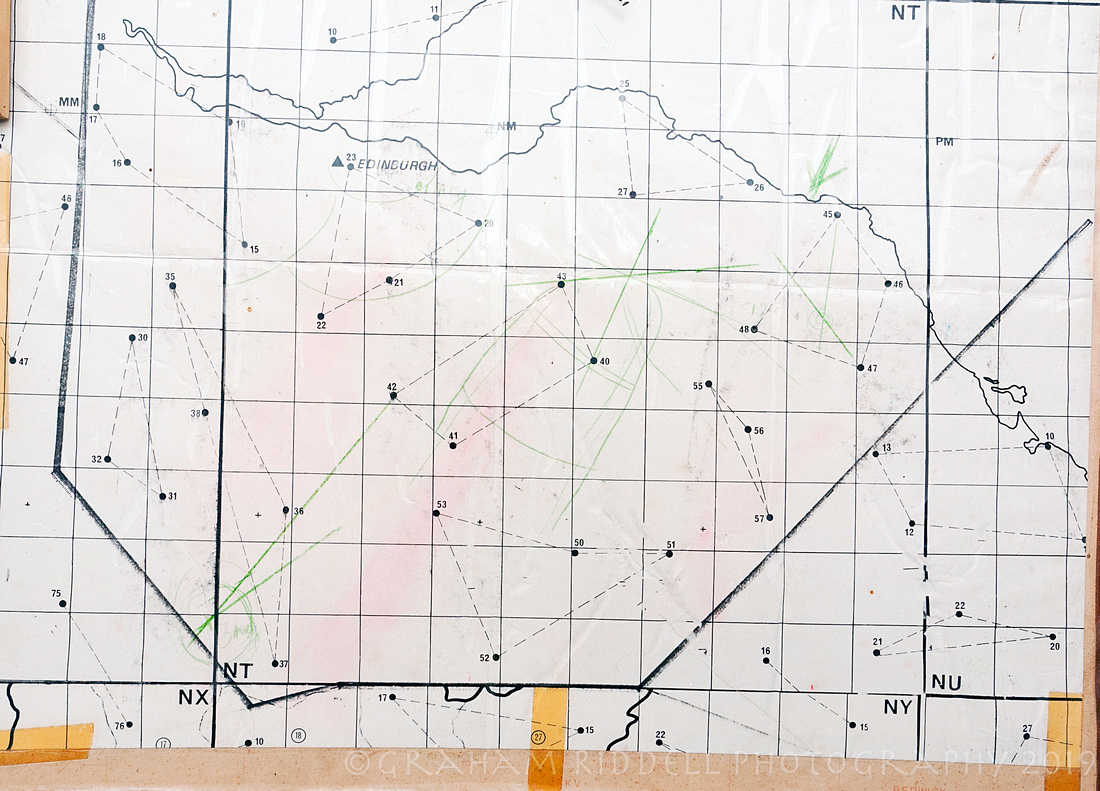 Terry allows a gentle sense of humour to preside over the otherwise austere facility with his large brown Teddy for company, whilst there were some welcome original kitchen stove appliances comprising a large steel teapot, a cooking pot, a small kettle and some all-important cleaning bleach. Clearly what ever happened outside in Cold War days, a brew was essential. 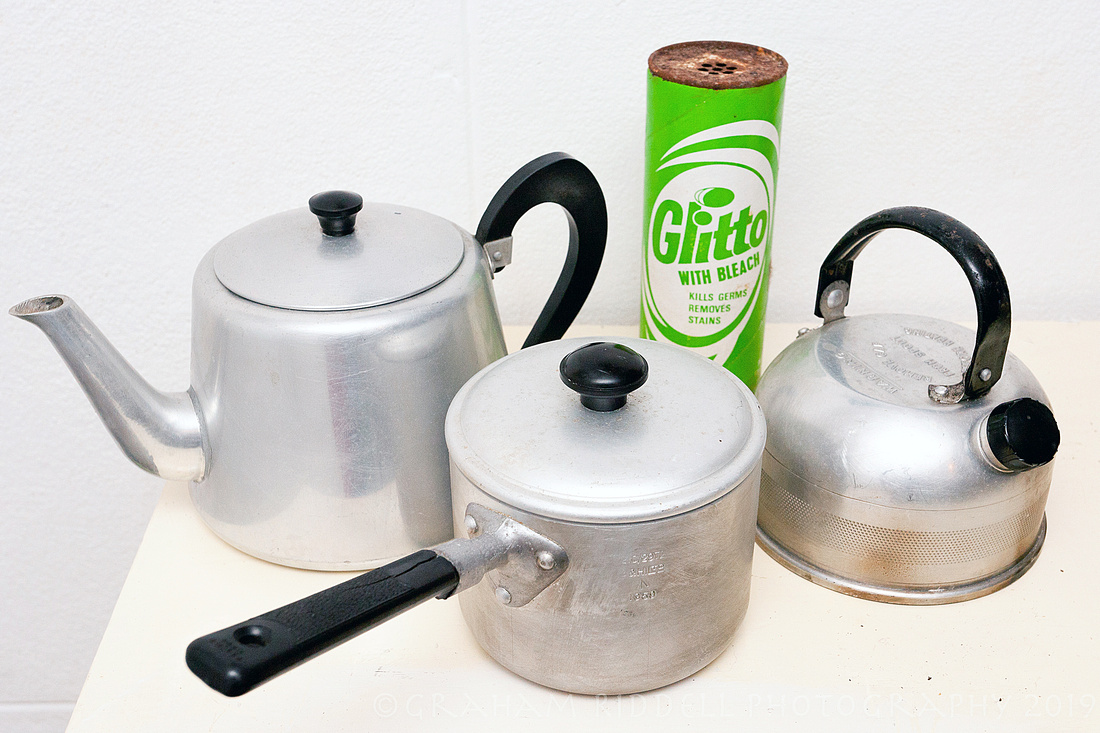 On the wall next to the door was where the main fuse box was located (still the original) and below it a battery from which power was drawn. At one time there would also have been an external generator but there was no sign of such now. Also in the room, near the door, was the chemical toilet and I considered that the lack of privacy here would surely mean it would have been kept in the smaller cupboard sized room next door. A toilet in the command room - how fitting I thought! On the walls were some homely canvas prints of a more artistic nature which were in stark contrast to the nuclear explosion photos opposite. 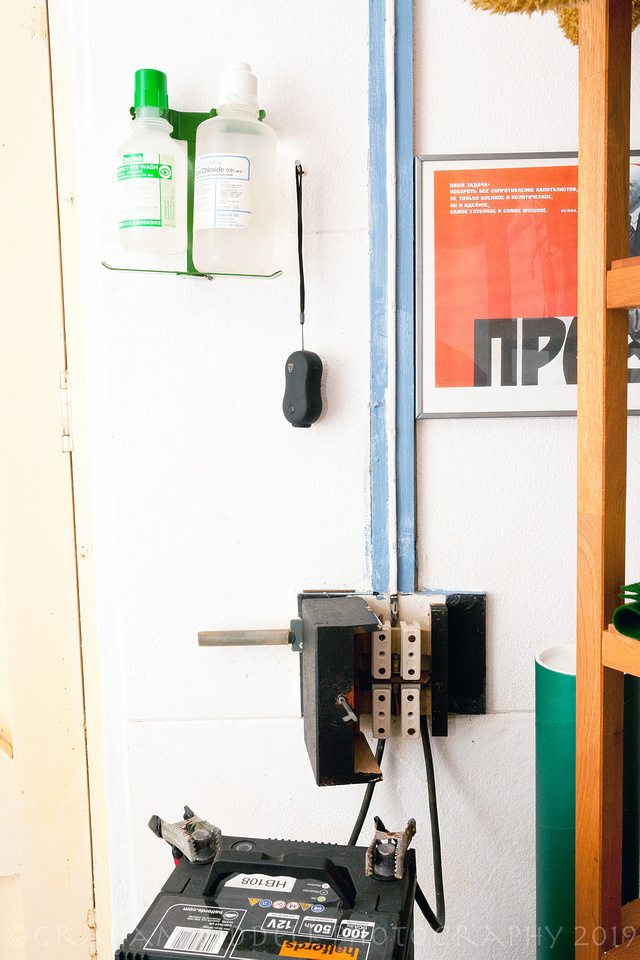 Traquair Nuclear Bunker-0300Power was supplied by battery for all lighting etc inside and a generator outside would have been used when possible. 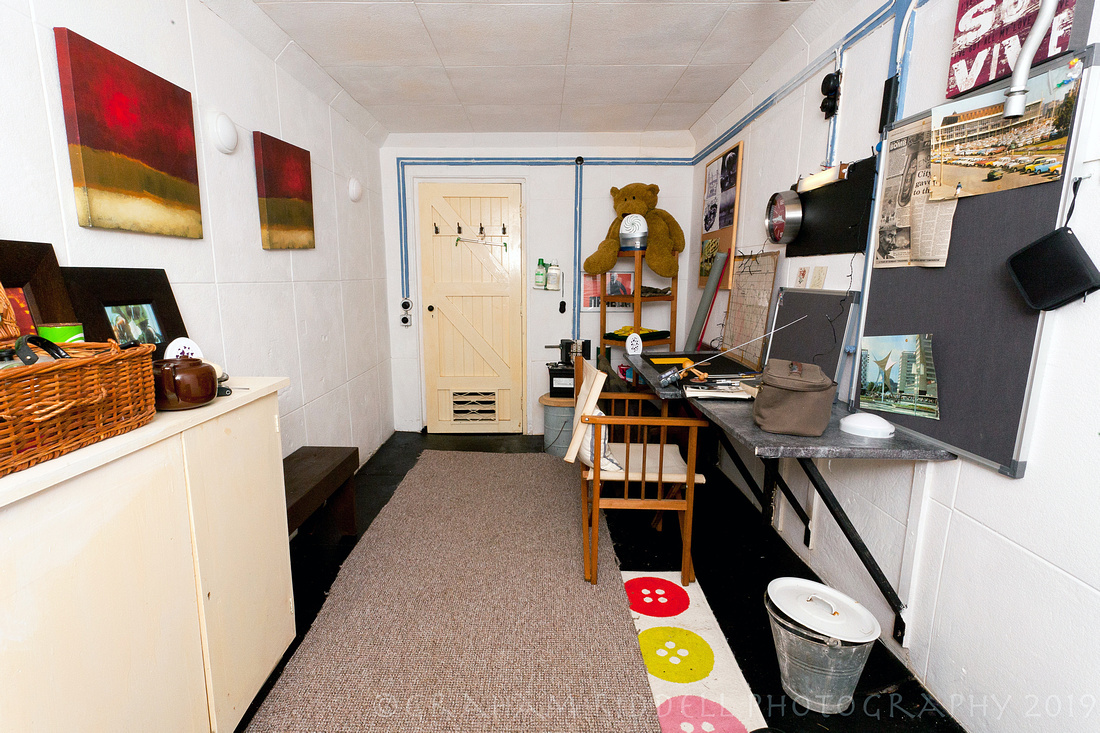 Traquair Nuclear Bunker-0305A few home comforts with the room largely as it was in the day.

Terry was preparing for his film night with the brave band of cinema-goers on the 29th March 2019, which was not too many days away at the time of writing. He hung a projector screen effortlessly from the steel sliding door where the periscope was and would project onto it from the other end of the room. I haven't seen 'Threads' myself however, from what I found online, the viewers will be in for a dramatic night in a perfect location! 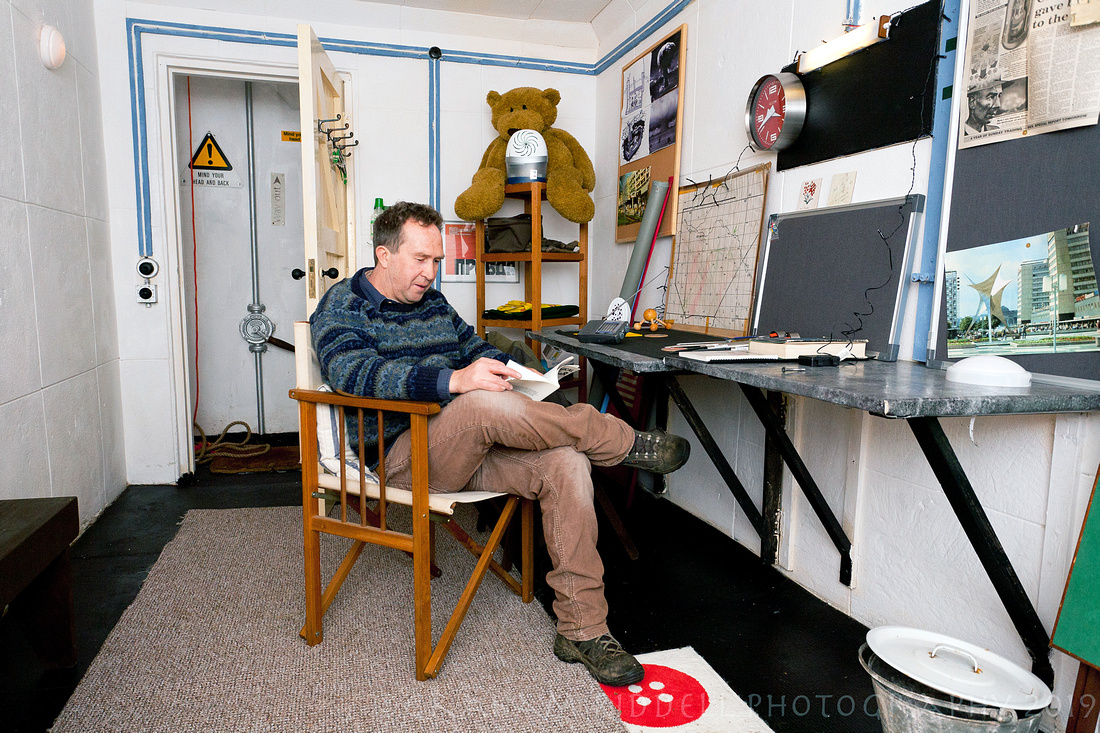 Traquair Nuclear Bunker-0294Owner, Terry Glancy surveys one of his historic books about the nuclear atomic science and consequences of its misuse. Teddy adds a lighter touch to the overwhelmingly seriousness of the bunker. 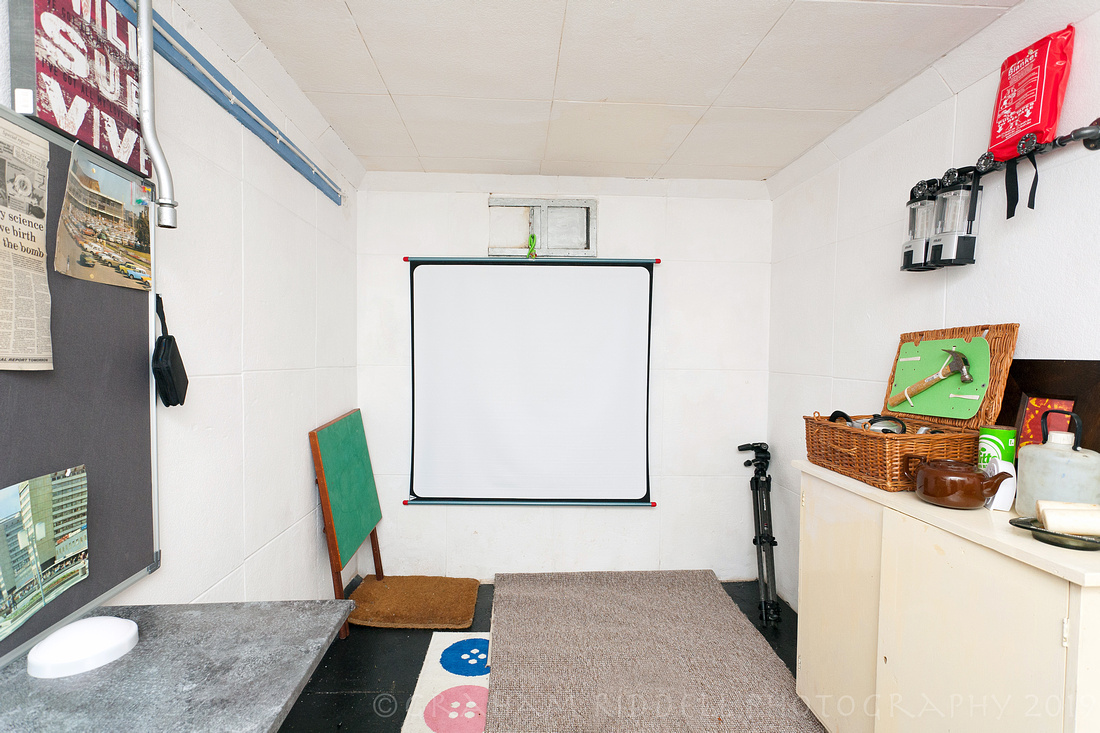 Traquair Nuclear Bunker-0317A planned showing of the harrowing 1984 Nuclear Drama, 'Threads' has its first Screening in the bunker on Friday 29th March 2019.

And so it was, that I came to learn a little more about Scotland’s secret history and my grateful thanks to Terry for showing me around. If you would like to visit for yourself, then you can get in touch with Terry through his Facebook page since at other times the facility is very securely locked! 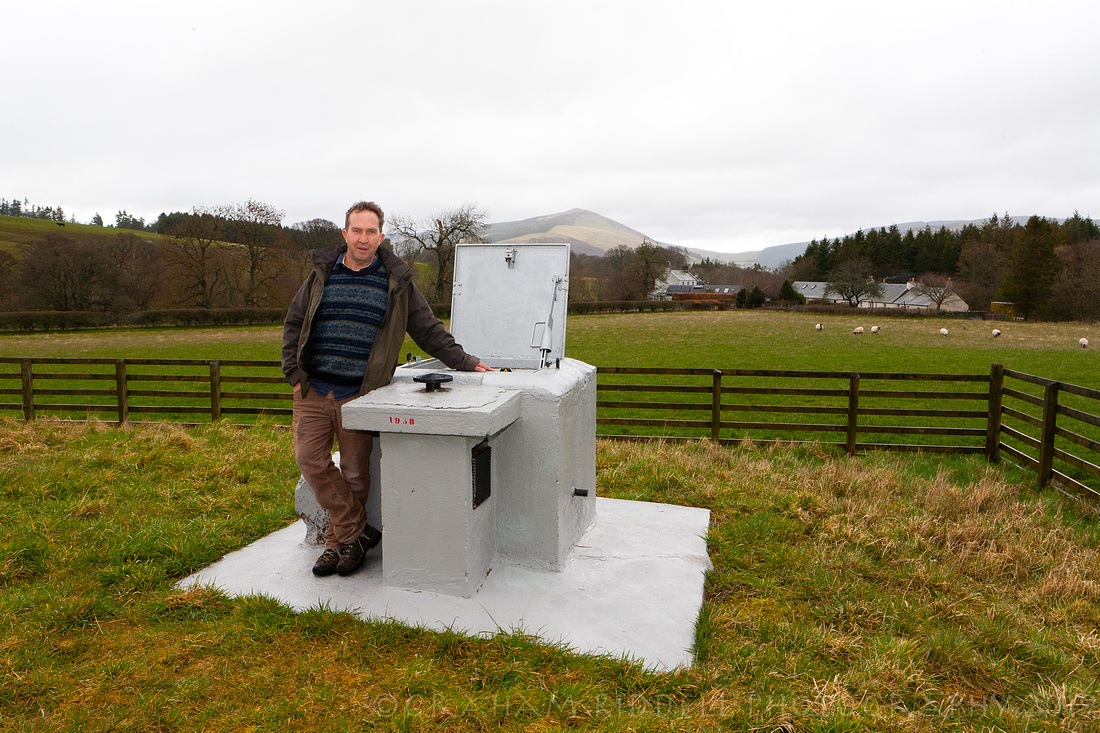 Traquair Nuclear Bunker-0324Terry Glancy at the open shaft that leads down fifteen feet to the nuclear bunker below. Traquair, Scottish Borders, Scotland, UK. Build in 1958 as a main hub of three within a larger grid network covering the Bordrs up to Edinburgh. March 22nd 2019.