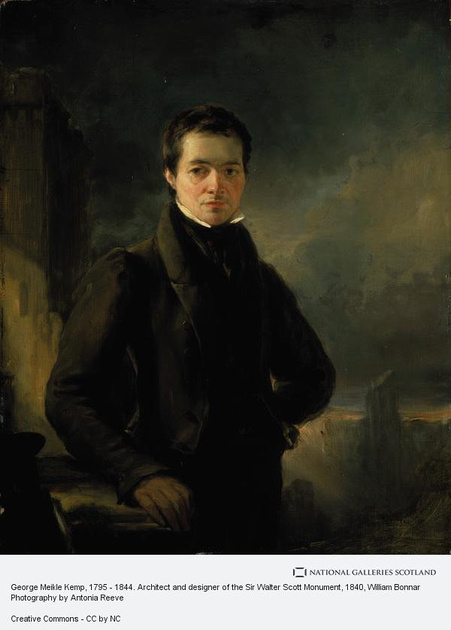 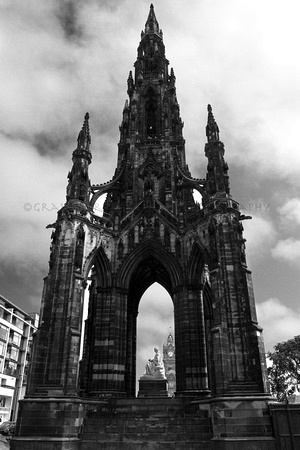 Sir Walter Scott’s iconic, gothic tower and memorial, is a dramatic addition to Edinburgh’s architectural heritage and city landscape. Its prominent position in Princes Street Gardens adjacent to Princes Street and Waverley Bridge, originally towered above the surrounding buildings from which atop can still be seen outstanding views of Calton Hill, Edinburgh Castle, Princes Street and the gardens below. It is a world famous structure and yet the story behind its architectural designer is less well known but equally worthy of note.

George Meikle Kemp was born on 26th May 1795 in the Moorfoot Hills of the Scottish Borders at Gladstone Loch (Reservoir) to James Kemp, a lowly Borders’ shepherd and mother Jean Mowbry. George was a shy and somewhat timid child which does not appear to have held him back in life. The family moved almost immediately after George’s birth to work at Newhall Estate near Carlops south of Edinburgh. There he grew up and was educated in Penicuik where he developed his talents in carpentry and interest in poetry and the violin, however it was his amateur passion for architecture that was to become his true life path.

A memorial wall now stands on the northern gable of Moy Hall, Redscarhead, off the A703 near Cringletie, a few miles north of Peebles, by Eddleston Water. The building was then the workshop of master carpenter Andrew Noble, joiner & millwright, under whose supervision he served a four year apprenticeship. It is now a private residence and is easily missed when travelling by car on the A703, being something of a well kept secret reserved only it seems to those seekers of Kemp’s story and his subsequent contribution to the world of gothic and neo gothic architectural design. The garden (at the time of writing) is in a fairly poor state and could do with a little love and refurbishment as it is now overgrown with weeds and the stones have become blackened and discoloured by weathering. 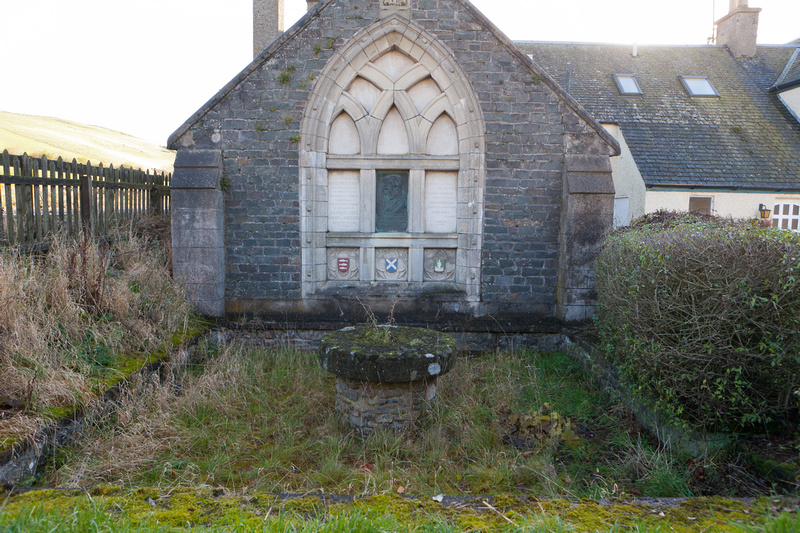 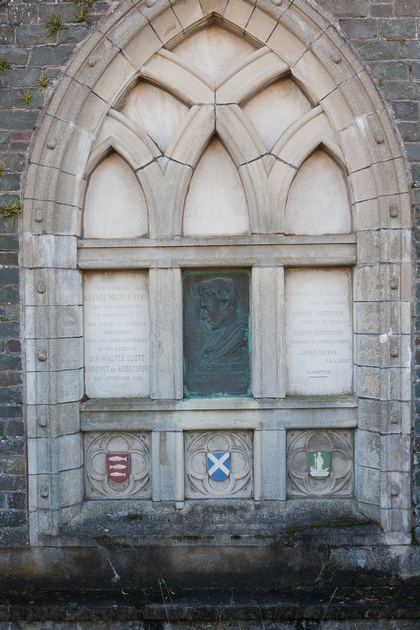 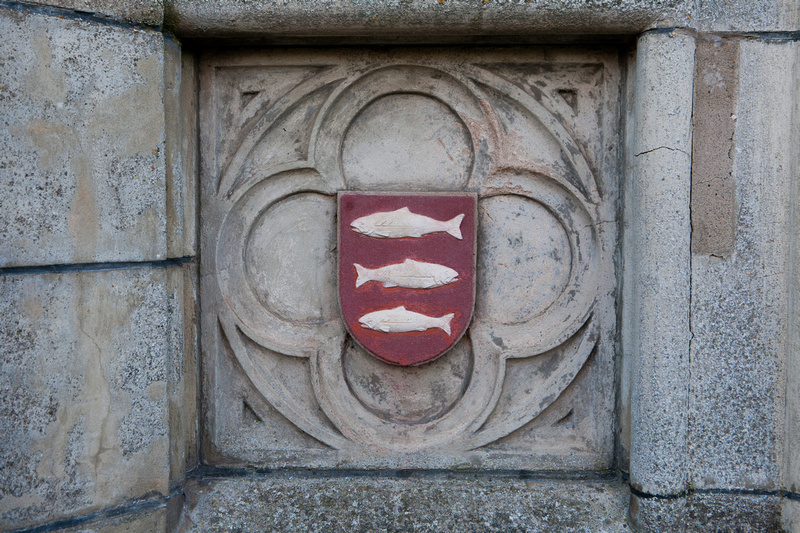 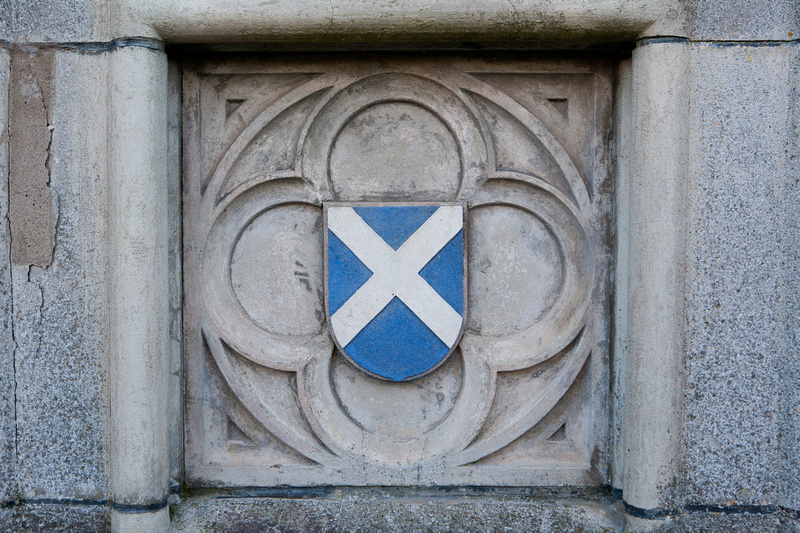 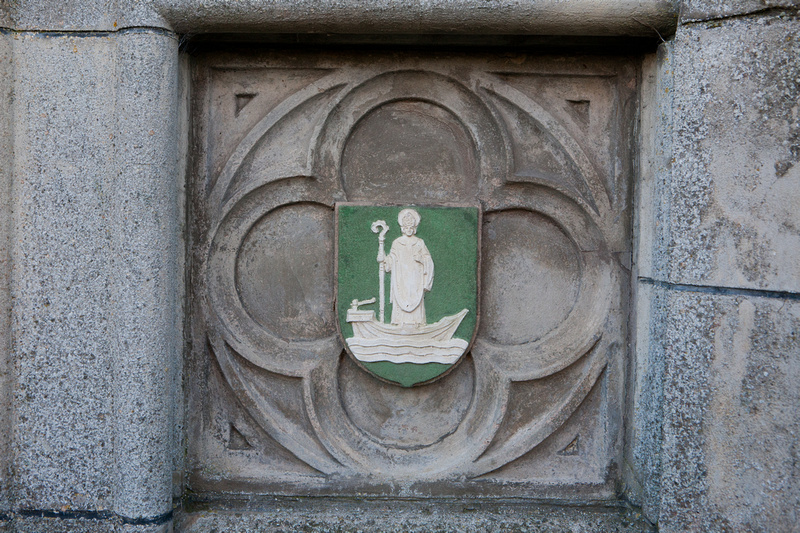 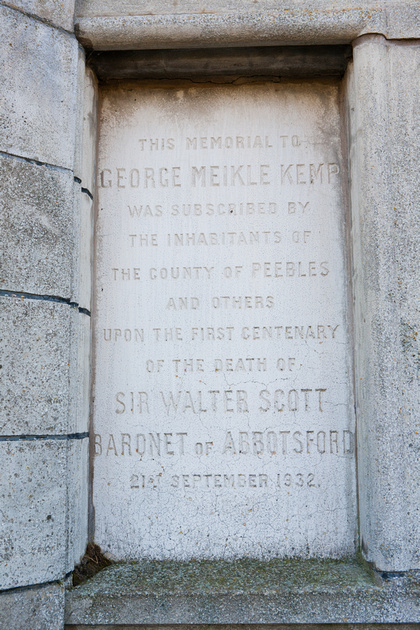 Left PanelThis Memorial To GEORGE MEIKLE KEMP Was Subscribed by the inhabitants of the County of Peebles and others Upon the FIRST CENTENARY of the Death of SIR WALTER SCOTT Baronet of Abbostford 21st September, 1932 Photo©Graham Riddell Photography 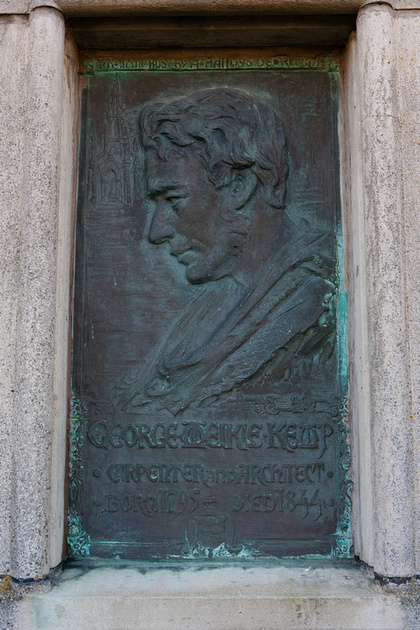 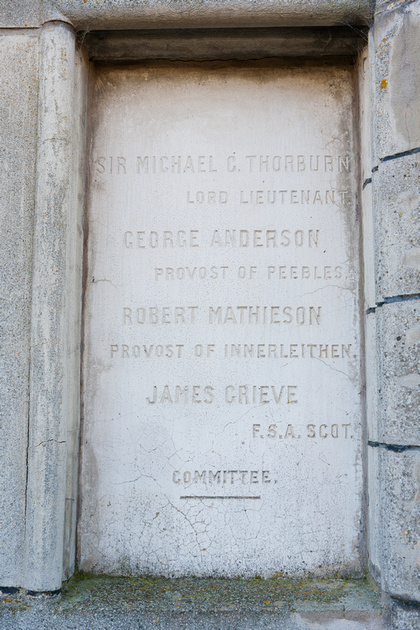 As a child of ten, Kemp had occasion to visit Roslin Castle and was inspired by the design and structure of the ruins there and nearby Rosslyn Chapel. In later years he ‘walked’ extensively throughout the Scottish Borders, visiting to sketch and draw details of the area's rich, historic and religious architectural heritage of it's abbeys such as Dryburgh, Kelso, Jedburgh and in particular Melrose Abbey, where one of history's renowned medieval craftsmen, John Morvo, a master mason, had worked on its construction.

It is worth reflecting upon today, how folks travelled in those days as there were no buses, taxis or trains that we take so much for granted and Kemp therefore went on foot often covering twenty to forty miles as a matter of course!

By chance, Kemp was walking to Galashiels to a new job there (purportedly in fowl weather) when he was given a lift by non other than Sir Walter Scott in his private carriage. They became friends and perhaps by Scott’s influence, or through his own family, Kemp eventually joined the Scottish Masonic Order and was accepted into Lodge St. Andrew, Edinburgh, in 1827 as a Freemason. Freemasonary has long been a magnet organisation attracting publishers, writers, architects and craftsmen amongst others and would have been an ideal organisation to network and develop his contacts and career.

Indeed through his connections he was apparently introduced by his brother James, to the Duke of Buccluech for whom Kemp provided drawings for the architect of the proposed Bowhill House near Selkirk and he submitted designs for another grand house the Duke was considering building at Dalkeith and constructed a wooden model for it.

Kemp continued to travel extensively at home and abroad where he plied his trade and was therefor able to support himself financially. He moved to Lancashire in 1817, then in 1824 to London then on to Boulogne, Abbeville, Beauvais and Paris visiting each location and staying there for several weeks, allowing him to work and study the ancient churches and abbeys of gothic design including Notre-Dame. Only the death of his mother brought him back home to Scotland.

In 1830 Kemp’s drawings of Melrose Abbey were exhibited at the Royal Scottish Academy which led to a further commission for drawings for a planned publication ‘Scottish Cathedrals and Antiquities’ by an engraver called Mr. Johnstone. This project floundered but created the opportunity for him to submit further ideas and architectural plans for the restoration of Glasgow Cathedral incorporating two new towers. Controversy over drawings rights between the leading architects James Gillespie Graham ensued, Kemp had used his pseudonym John Morvo (the medieval stone mason of Melrose Abbey), rather than his real name and strove to claim his contribution to the design and be recognised as his work. 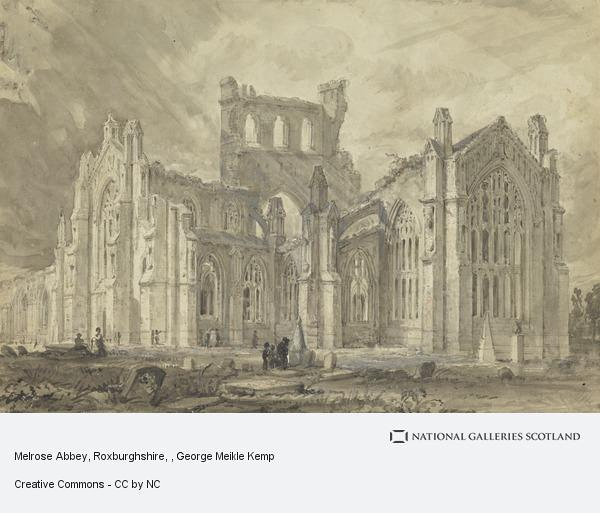 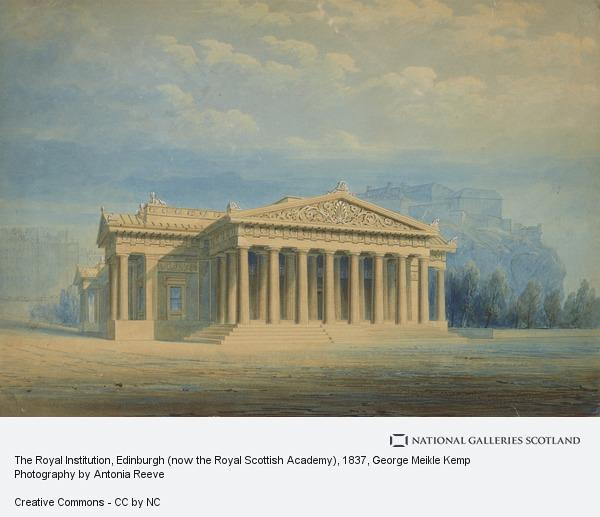 1832 he married Elizabeth Bonnar (daughter of eminent artist Willian Bonnar) and fathered four children, two boys & two girls. Sadly his eldest son died at the age of twenty and was showing great promise as a noteworthy architect and of pleasing character in his own right.

Another opportunity arose to prove Kemp's architectural genius in 1836, with a design competition for a new public monument in memory of the great novelist and poet Sir Walter Scott (whom Kemp had met and been given a lift from all those years previously), who had died a few years earlier in 1832. Kemp submitted his plans, again under the pseudonym of John Morvo, not having sufficient confidence that he would be taken seriously by the architectural establishment, being a mere craftsman.

The design was based on some of the work he had previously prepared for the Glasgow Cathedral project and drew on all his experience collected over years of Gothic Architectural study. His initial design was awarded third place, however the committee embarked on a further competition and being impressed with his work, and after further refinement of his original design, he was ultimately successful in winning the commission in 1838. 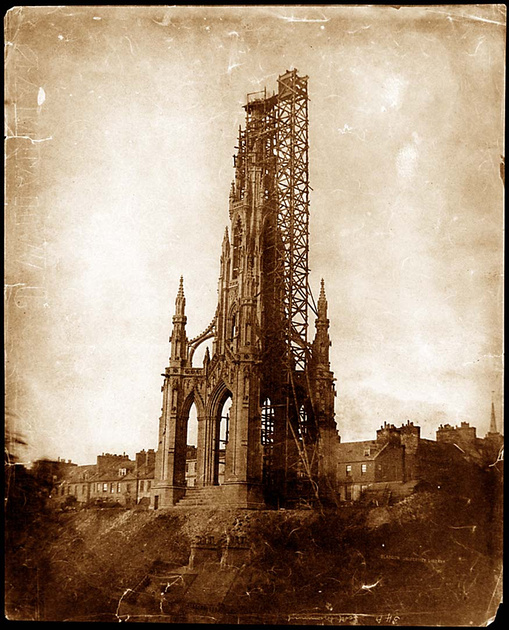 Sadly, Kemp never saw his monument built. Walking home from a visit to a contractor in fog and poor visibility, he appears to have lost his way and fell into the Union Canal and drowned, only to be found several days later. He is buried in St Cuthbert's graveyard at the west end of Princes Street. 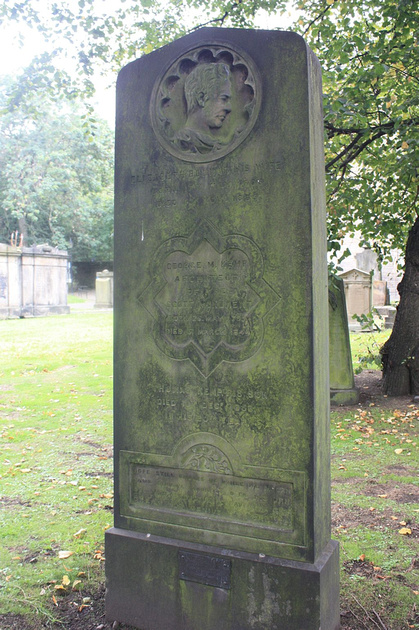 The_grave_of_George_Meikle_Kemp,_St_CuthbertsGeorge Meikle Kemp's final resting place is within sight of the Scott Memorial.

The National Galleries portrait at the top of this piece was painted by his brother-in-law William Bonnar who also oversaw the build and construction of the Sir Walter Scott Monument. It was completed in the autumn of 1844 with Kemp’s son laying the finial. The monument was finally inaugurated on 15th August 1846.

And so it was, that the man who gave a boy a lift, unwittingly met the future creator of his now world famous, memorial.

My special thanks to local friend Ross Happer of Innerleithen for taking me to see the site and inform me of much of it's history. 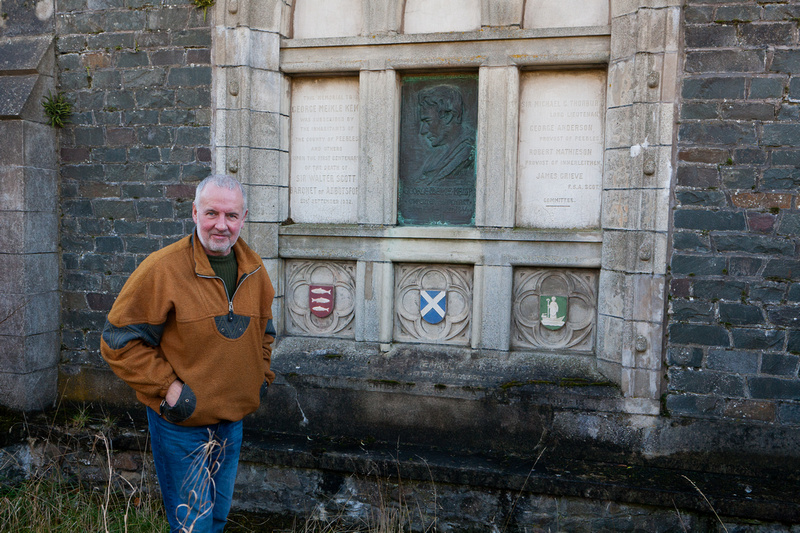